Guitarist and vocalist Karl Louis Weismantel was born into an academic family with a father, William, who was a Professor of Urban Planning and a mother, Martha, who is still an editor of academic materials. His only sister , Mary, is a Professor of Anthropology. While there was a bit of good music in the family record collection, the path to being a musician was a unique one for the Weismantel lineage.

In 6th grade Karl began with the trumpet and continued through 8th grade. In high school he switched to guitar as playing on the soccer team made the mandatory marching band (if you wanted to be in the jazz band) unwieldy. Karl was inspired initially by the likes of Jeff Beck, Jimi Hendrix and Jimmy Page but soon became interested in jazz around 1985. Karl studied privately with Ray Valla and Ed Legare in Gainesville, Florida and proceeded to take college music theory classes at Santa Fe Community College and the University of Florida. While Karl had good aptitude for math and engineering he eventually decided against an engineering degree and became a music major, transferring from the University of Florida to the University of North Texas in 1988. At North Texas he was exposed to many great musicians and was made very aware of how competitive the music world is. He followed Professor Jack Petersen, then at North Texas, to the University of North Florida in 1989, where he played in the top jazz ensemble and received his B.A. in Music.

Karl Weismantel - jazz guitaristFrom 1991-1993 Karl played full time in the North Florida area, playing steady gigs on the beaches, at the Amelia Island Ritz Carlton and similar resorts in the area and also in the Caribbean on cruise ships. A part-time job as a physical therapy aide and a big tax bill from the IRS led Karl to Miami to complete a degree in Physical Therapy at Miami Dade Community College (Karl is still a licensed physical therapy assistant). While in Miami Karl played with jazz and reggae acts on South Beach.

From 1994-1996 Karl was back in Gainesville, working at Shands Teaching Hospital during the days and gigging at night. In 1996 Karl moved to Atlanta and was immediately in demand as a sideman, playing over 900 gigs the first 3 years in town, including appearances at the Atlanta and Atlanta-Montreaux Jazz festivals and at the Fox Theater. Karl spent several years in Atlanta working as a musician full time. While in Atlanta Karl began working on the engineering side of music as well, building a recording rig and learning how to record music. In 2002, after the passing of his Father, Karl left Atlanta for Gainesville, FL and resumed gigging in Florida.

From 2003-2005 Karl attended Florida State University where he received a Masters in Jazz Studies. While at F.S.U. Karl was privileged to be allowed to study classical guitar with the world-renowned Professor Bruce Holzman. Karl also studied Baroque music history and counterpoint while at F.S.U. and these studies had a significant impact on his understanding of music past and present.

From 2005 to the present Karl has resided in Gainesville, FL and has assembled a quality home studio, recording tracks for the 2008 release “In Hand”. Karl performs, teaches, composes and records and spends his leisure time on the water, kayaking or canoing in North Florida’s beautiful water ways. Philosophy

I believe that music is one of the most fundamentally profound and beautiful manifestations of existence that human beings experience. It unites those who speak different languages and bridges vast divides between people instantaneously like no other mechanism. In studying music from early in the Western Music tradition such as Renaissance and Baroque composers I have learned that much of what comprises our harmonic and melodic vocabulary and experience was extant long ago. In learning about jazz music, thereby studying music with elements OUTSIDE the Western musical tradition (mainly rhythmic complexity and subtlety) I began to understand how the conglomeration of cultures from the East with the West during the twentieth century has led to manners of performance that are revolutionary when compared to previous musical practices of any culture.

I believe it is the duty of those who call themselves musicians to strive for the highest levels of creativity and to be prescient stewards of a diverse musical landscape, aware that simply replicating music from the past causes stagnation and also predisposes audiences to be indifferent to live versus pre-recorded performances. The purpose of studying music from the past is to create new and exciting music in the future and to foster audiences that can appreciate artistry and new compostition. 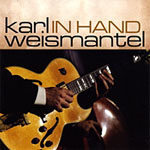 All About Jazz musician pages are maintained by musicians, publicists and trusted members like you. Interested? Tell us why you would like to improve the Karl Weismantel musician page.