Though the title of her debut album, NERO, is a winking homage to the influential Laura Nyro, Australian-born singer-songwriter Kathleen Potton isn't interested in simply paying tribute. Instead, Potton has imbibed the lessons of Nyro, Joni Mitchell, Kate Bush and other singular female songwriters both musically and in the distinctive paths they have cleared through diverse genres, and created a compelling, revealingly personal travelogue of her own journey in music. NERO comes at the dawn of a promising career. It is a summation of Potton's experiences to date, as her pursuit of her muse has led her on an unlikely trek from the New South Wales countryside to Singapore and finally New York City, where she has emerged as an exciting voice melding influences of artful pop, jazz and R&B into an absorbing blend that is as inviting as it is uncategorizable.

”Kathleen’s writing is as intuitive as it is imaginative, never shying away from complexity, nor relying upon it for interest. Her vocal performances on this record are graceful and understated, allowing the songs to speak for themselves without tricks or flash.” —Alan Hampton 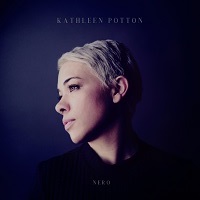 All About Jazz musician pages are maintained by musicians, publicists and trusted members like you. Interested? Tell us why you would like to improve the Kathleen Potton musician page.