Katt Hernandez moved to Stockholm in 2010, and rapidly began working with a great many artists and new music organizations. In addition to solo violin work, she co-founded The Schematics and Deuterium Quartet, and has worked with a host of musicians and others in Sweden's improvised, electronic and experimental music scenes. Katt earned a Masters degree in Electroacoustic Composition from the Royal Music Academy of Sweden in 2014, where she studied with composer Bill Brunson. In 2015 she began a PhD in Music at Lund university, and is also employed at the Royal Music Academy as part of Klas Nevrin's research project on improvisation, Music in Disorder. She is has most recently been playing in the Fire! Orchestra, led by Mats Gustafsson, in Julia Strzalek's Kolibri project, in Henrik Frisk's ExpEAR ensemble, with her own group, The Schematics and in a vast number of spontaneous collaborations. Katt has been featured both as a violinist and as a composer on festivals, series and radio stations throughout the world.

Before leaving the U.S., Katt was a 13 year veteran of experimental music scenes on the east coast, where she worked with a vast array of musicians, dancers, visual artists, puppeteers, film makers and performance artists, in venues ranging from underground urban art spaces to ivy league concert halls. In Philadelphia, after living in the Boston area for nine years, playing the violin, running spaces, and producing shows. She immediately became involved in performances with Bowerbird, Soundfield, Ars Nova, and Nicole Bindler's Dance Ensemble upon her arrival. Over the last year, Katt has also toured the U.S. with Vashti Bunyan, and most recently also with Vetiver, including a rather magnificannt concert of this new and old form fo music at Carnegie Hall as part of David Byrne's “Welcome to Dreamland” event. Before leaving Boston, she also participated in the Voltaic Vaudeville festival, wherein she played Solo, with butoh dancer Jennifer Hicks, and as part of the Beat Circus Vaudeville Orchestra.

Focused primarily on freely improvised music, Katt draws a firey array of electronic-like sounds and keening melodies from her completely accoustic violin. She works extensively with microtonality, drawn from earlier studies of a mixture of sources, including traditional folk and sacred musics of the Middle East, Turkey, and Eastern Europe, various odd-ball whisps of old Americana, and the Maneri/Sims 72 note system. Playing with as wide and unexpected a variety of other performers as possible is tantamount to her sonic and spiritual pursuits. She has also played music of the late Ottman empire and Whirling Dervish ceremonies with the Eurasia Ensemble. She spent some time playing old-time, vaudeville, and early jazz tunes with Matt Somalis(a.k.a. Shoe) whilst channelling the spirit of Amelia Earhart in the duo Lindy's Radio. And she also plays the mysterious incarnation of a disturbing cartoon character in the frightening music and performance art duo Dr. Selenium and Madame Margo. In fact, she plays somewhere for somebody at least weekly, come hell or high water.

In addition, Katt booked well over a hundred shows, festivals, and concerts during her time in Boston. She was a crazed avatar for the Zeitgeist Gallery, where she worked on everything from publicity and shows to mischeif and whimsey. She also lived in the short-lived Andrew Square art space next to an elevator shaft, kept a studio at the Redtail, and performed multiple times at the Pan 9 space. She continues to seek out underground spaces for those things too strange and magnificant for commercial clubs and foundation concert halls in Philadelphia.

Katt grew up in Ann Arbor, MI, where she met all kinds of the most remarkable humans you might imagine, and played her violin throughout the Detroit metro-area on a regular basis starting at the age of 14. Her first free improvisation show was at the age of 14, where she was delighted to find herself sharing the stage with Eugene Chadbourne, Frank Pahl and LaDonna Smith. She attended Community High School as a kid- a public school based on the utopic visions of the late sixties. She also spent two weeks every summer at the National Music Camp, wearing silly uniforms and learning about symphonic and chamber music. After attending classes as a teenager at the University of Michigan's Music School, she went there and studied composition, violin, electronic music, jazz, and improvisation, graduating in the end with the very first BFA in “Jazz Studies and Contemporary Improvisation” awarded by the school. Her teachers were George Balch Wilson, Ed Sarath, Even Chambers, Donald Walden, Elaine Sargous, Karin Swanson, Mike Grace, and Andrew Jennings. She played with a great many musicians and others there, including Only a Mother, Doctor Arwulf-Arwulf,the Creative Arts Orchestra, and the Blue Sun Quintet. Show less

”. . . musicians everywhere are aware of her exceptional artistry, and even international writers and producers are telling us of their fortunate discovery. . .it may be oversue, but it is good to see that someone as good as Katt is finally being recognized.” ~ Stu Vandermark, Cadence Magazine

”. . .The Long Awaited Etcetera puts Hernandez squarely on the radar. . . as one of the few violinists of consequence in improvised music”~ Stanley Zappa, Bannanafish

”Hernandez is a young violinist who shows the potential to develop into a major voice in experimental violin improvisation and join the ranks of Mat Maneri, Mari Kimura, Malcolm Goldstein, and Takehisa Kosugi”.~ Michael A

”. . . musicians everywhere are aware of her exceptional artistry, and even international writers and producers are telling us of their fortunate discovery. . .it may be oversue, but it is good to see that someone as good as Katt is finally being recognized.” ~ Stu Vandermark, Cadence Magazine

”. . .The Long Awaited Etcetera puts Hernandez squarely on the radar. . . as one of the few violinists of consequence in improvised music”~ Stanley Zappa, Bannanafish

”Hernandez is a young violinist who shows the potential to develop into a major voice in experimental violin improvisation and join the ranks of Mat Maneri, Mari Kimura, Malcolm Goldstein, and Takehisa Kosugi”.~ Michael A. Parker, All About Jazz

”It was Hernandez that stood out in this piece, bringing an ear clearly comfortable with classical and rock approaches, but despite this grounding, at times flirting with complete choas- Eric Allen Hatch, Signal-to-noise 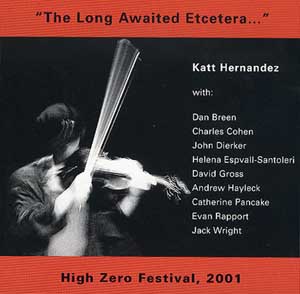 All About Jazz musician pages are maintained by musicians, publicists and trusted members like you. Interested? Tell us why you would like to improve the Katt Hernandez musician page.