Vocalist and composer Kavita Shah makes work in deep engagement with the jazz tradition, while also addressing and advancing its global sensibilities. A lifelong New Yorker of Indian origin hailed for possessing an “amazing dexterity for musical languages” (NPR), Shah incorporates her ethnographic research on Brazilian, West African, and Indian musical traditions into her original repertoire. She was named Downbeat's Best Graduate Jazz Vocalist in 2012 and won the ASCAP Herb Alpert Young Jazz Composers Award in 2013; her highly-acclaimed 2014 debut album—the internationally-minded project VISIONS (Inner Circle Music/Naïve Records)—was co-produced by guitarist Lionel Loueke. In 2017, her interdisciplinary work “Folk Songs of Naboréa,” a contemporary song-cycle for seven voices, was premiered at the Park Avenue Armory and named by Nate Chinen (NPR) as one of the Top 10 Jazz Performances of the year. Shah’s second album Interplay, a program of standards and originals in duet with bassist François Moutin – with special appearances by pianist Martial Solal and NEA Jazz Master Sheila Jordan, Shah’s mentor – is due for release in February 2018 on Dot Time Records.

Raised in Manhattan, Shah traces her commitment to jazz to the childhood influence of uptown saxophonist Patience Higgins, a former neighbor whose band she would later join at hallowed Harlem spots like Minton’s and the Lenox Lounge. Trained first as a classical pianist, Shah spent her formative years in the prestigious Young People’s Chorus of New York City, absorbing and performing in a vast range of musical idioms. An early and enduring fascination with Spanish literature and Afro-Cuban music helped guide her to major in Latin American Studies at Harvard, where her B.A. honors research on contemporary Afro-Brazilian music and politics, drawing on fieldwork in Salvador da Bahia, won the Kenneth D. Maxwell Prize in Brazilian Studies and the Cultural Agents Thesis Prize. She was also awarded the David McCord Prize for artistic talent. After a brief stint working for The Nation magazine and Human Rights Watch, Shah went on to earn a Master of Music degree in Jazz Voice at Manhattan School of Music, where she studied with Theo Bleckmann, Peter Eldridge, Steve Wilson and Jim McNeely. She continues to study voice with Jeanie LoVetri and composition with Nils Vigeland.

From her formal training, Shah draws a keen interest in complex arrangements and adventurous approaches to the voice as an instrument, leading her to collaborate with contemporary composers like Steve Newcomb and Miho Hazama in settings ranging from chamber groups to jazz philharmonic. Just as important to Shah, she grounds her own compositions in the art of the song as passed down through the tradition – not least by Jordan, the great NEA Jazz Master who has been her artistic and professional mentor. Shah's research interests in traditional music practices have taken her to Brazil, Cape Verde, Ghana, Ivory Coast, Tanzania, Turkey, and India, where her work has been supported by the David Rockefeller Center for Latin American Studies, Jerome Foundation, and Asian Cultural Council. Shah credits tradition, as embodied in its elders, for grounding her own personal and artistic identity and her vision of music as not just pursuit of virtuosity, but cultural work.*

“A polyglot in more than language alone.” - Siddhartha Mitter, The Boston Globe ​”What she's doing is something completely new.” - NPR, “All Things Considered” “Shah’s music reflects the insatiably curious mind of an ethnographer, the soul of a poet, and the eye of a painter.” - Owen McNally, WNPR 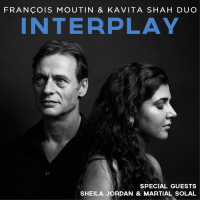 All About Jazz musician pages are maintained by musicians, publicists and trusted members like you. Interested? Tell us why you would like to improve the Kavita Shah musician page.