This plaintive haunting lyric sets the tone and establishes the theme of singer songwriter Kemp Harris’ sophomore release, Edenton. This album is both a literal and figurative journey back to Harris’ roots in Edenton, North Carolina, the town where he was born.

For Harris, an African-American who left the small-town south for the Northeast decades ago, this is a trip home -- home as a musical foundation steeped in southern gospel and the simple truth of the blues, and as a place where we reflect on our place in the world. In the tradition of such intensely personal albums as Sam Cooke’s Night Beat, the album bears a soul of its own.

With almost four decades behind him as a songwriter and performer, Kemp Harris has collaborated with a surprising list of talent. He has shared the stage with Koko Taylor, Taj Mahal and Gil Scott-Heron, as well as composing original music for the Alvin Ailey American Dance Theatre.

On Edenton, Harris’ wide range of experience comes through in a powerful and intensely personal album. The album features the legendary Holmes Brothers on backing vocals. The Brothers bring the full force of their talent, providing deep, rootsy harmonies to the raw-boned force of Harris’ lead. With the support of the Holmes Brothers, Harris’s original songwriting and performances reflect a mature artist not content to rehash the clichés of the blues and roots genre. Harris shows his willingness to fuse diverse elements in the search for a more modern and timely blues. Edenton brings an edgier, darker hue to this traditional American music.

The original material is augmented by a diverse group of covers. Donny Hathaway’s Tryin Times is a hypnotic blues vamp, rolling along in a place where Howlin’ Wolf would have felt at home. In contrast, the Willie Nelson classic Night Life is a stark duet of vocal and acoustic bass that emphasizes underlying bittersweet regret. Kemp really reaches back to his roots on the gospel classic Didn’t It Rain. The a cappella version features his mother and aunt (each of them in their late-seventies) on vocals in a version the trio has been singing together since Kemp’s childhood.

The album was recorded at Hi-n-Dry Studios in Cambridge, MA, the former studio and home of Mark Sandman and the band Morphine by engineer Tom Dube (Marc Cohn, Buffalo Tom, Ben Kweller, Juliana Hatfield, Duncan Sheik). As a result, the production on the album is sparse, warm and organic, letting the humanity of the songs and performances come through.

Some Times, I feel like I want to go home -- not for nostalgia, but to understand one’s place in the world. Harris brings us along on his search on this album and the result is intimate, honest and engaging. Edenton is a richly thematic album steeped in tradition but timeless in its message. Simply, this is a blues record for modern times. Blues as a reflection of the human spirit -- as a cathartic expression of the soul. Show less 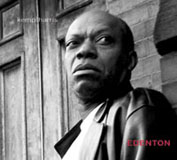 All About Jazz musician pages are maintained by musicians, publicists and trusted members like you. Interested? Tell us why you would like to improve the Kemp Harris musician page.