Kendra Shank is “a superbly skilled vocalist” (New York Times) with a “delectable voice” (Time magazine) and “breathtakingly original concept” (Boston Globe). Her inventive phrasing, soulful storytelling, and spontaneous ensemble interplay, make each performance a creative, in- the-moment experience that entrances and inspires audiences. Headlining at festivals, concerts, and clubs across the U.S. and internationally, Shank combines jazz originals, standards, world music, French chansons, folk/pop songs, and open improvisation in an adventurous, genre-bending style that inspired Abbey Lincoln to call her “an original; a singer with a sound.”

Kendra Shank's six critically acclaimed CDs have garnered numerous “Best of the Year” awards, DownBeat poll recognition, and international airplay. “Afterglow” (Mapleshade Records, 1994), was co-produced by jazz legend Shirley Horn, who presented Shank at the Village Vanguard for her New York debut. Her second album, “Wish” (Jazz Focus Records, 1998), received a Time magazine rave, declaring: “Get in on the ground floor: this lady is going up.” “Reflections” (Jazz Focus Records, 1998) debuted her current working band, an ensemble of New York all-stars with pianist Frank Kimbrough (Maria Schneider Orchestra), bassist Dean Johnson (Gerry Mulligan), and drummer Tony Moreno (Dave Liebman), who are featured on her two subsequent recordings. Shank’s ground-breaking “A Spirit Free: Abbey Lincoln Songbook” (Challenge Records, 2007) pays tribute to that legendary singer’s importance as a songwriter. “Mosaic” (Challenge Records, 2009), is credited to the “Kendra Shank Quartet” in recognition of the collaborative nature of her band who “have spent [over] a decade tightening their exemplary unit, and the triumph of their solidity is evident throughout this stunningly inventive pastiche of covers and originals” (Jazz Times).

In 2014 Shank's duo project with guitarist John Stowell, “New York Conversations,” was released on TCB (The Montreux Jazz Label). Featuring original compositions, standards, and free improvisations utilizing vocal electronic looping, the album was called “magical...ingenious...original” by The Wall Street Journal. Her next album will be a live concert recorded in duo with pianist Geoffrey Keezer.

A prominent figure on New York’s jazz scene, Shank has headlined at the city’s premier venues, including: Blue Note, Birdland, Jazz Standard, Iridium, Kitano, and a 12- year residency at the historic 55 Bar. She has toured across the U.S. and in Europe, Asia, Africa, Australia, and Canada, with festival performances at Freihofer’s Saratoga Jazz, JVC Jazz, Jazz Port Townsend, Bumbershoot, Calgary Jazz, Edmonton Jazz, Wangaratta Jazz, Jazz in Marciac, Jazz à Vienne, and Jazz is Toulon, among many others. She has been featured on National Public Radio’s JazzSet and Piano Jazz with Marian McPartland, and Radio France’s Transcontinentales (with a college degree in French and Art, Kendra is bilingual and Paris was her second home for several years).

Kendra Shank’s “unique and immediately identifiable sound and style” (LA Times) is partly due to her eclectic background: she has been a theatre actress, a visual artist, and began her music career as a singer-guitarist performing folk, country, bluegrass, and French chansons before her passion turned to jazz. Fueled by curiosity and the thrill of exploration, she approaches music as “sound painting,” using her voice to create colors, shapes, and textures, always pushing her art forward. She has performed and/or recorded with a host of renowned artists, including: Abbey Lincoln (as guitarist on her “Over the Years” CD), Bob Dorough, Jay Clayton, Fred Hersch, Kenny Werner, Larry Willis, Bobby Watson, Gary Bartz, Steve Wilson, Billy Drewes, Victor Lewis, Billy Hart, Matt Wilson, Ben Allison, Ben Monder, Peter Leitch, and Mark Lamb Dance. She has taught clinics at University of North Carolina, The New School, Brooklyn-Queens Conservatory of Music, McNally Smith College of Music, Seasons Performance Hall, and Jazz in Marciac Festival. Show less

”Kendra Shank's delectable voice—warm-toned, fine-grained, quietly sexy—sets her well apart from the crowd, as does her knack for picking unhackneyed, slightly off-center material. The up-tempo tunes swing hard; the ballads shimmer and shine. Get in on the ground floor: this lady is going up.” -Terry Teachout, TIME magazine

”Kendra Shank has a powerful stage presence and 'a vast amount of emotional range.' Hearing her in person — with the attentively swinging pianist Frank Kimbrough, bassist Dean Johnson and drummer Tony Moreno — the immediacy of her musicianship is powerful.” -Nat Hentoff, WALL STREET JOURNAL

“...she intoxicates with a combination of power and perfume

”Kendra Shank's delectable voice—warm-toned, fine-grained, quietly sexy—sets her well apart from the crowd, as does her knack for picking unhackneyed, slightly off-center material. The up-tempo tunes swing hard; the ballads shimmer and shine. Get in on the ground floor: this lady is going up.” -Terry Teachout, TIME magazine

”Kendra Shank has a powerful stage presence and 'a vast amount of emotional range.' Hearing her in person — with the attentively swinging pianist Frank Kimbrough, bassist Dean Johnson and drummer Tony Moreno — the immediacy of her musicianship is powerful.” -Nat Hentoff, WALL STREET JOURNAL

“...she intoxicates with a combination of power and perfume. ...Shank has a mature, intelligent voice, dark and sensuous, playful but never girlish. Her tone is clear, but she doesn't hesitate to get it dirty. ...her bounding, courageous solos sometimes bring to mind Kurt Elling (though she started her career first), bridging the gap between singing and speaking...” -Neil Tesser, CHICAGO READER

“...she takes the old folkie “Black Is the Color of My True Love's Hair” and gradually whips it into a Coltrane-esque emotional frenzy. ...Shank is supremely talented, innovative and at the same time readily accessible. There's no one else quite like her.” -Will Friedwald, VILLAGE VOICE 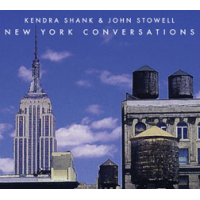 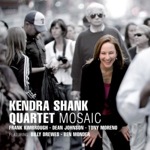 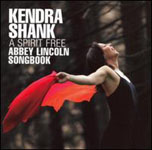 All About Jazz musician pages are maintained by musicians, publicists and trusted members like you. Interested? Tell us why you would like to improve the Kendra Shank musician page.