Urbane, velvet-voiced song stylist Kevin Ahart cuts a distinctive figure on his much-anticipated debut release Let’s Take The World My Love. The album’s ten memorable performances find the charismatic young artist singing original and classic cover material in a smoothly expressive voice that echoes those of his vintage saloon-singer heroes, enhancing and extending the American musical traditions from which he draws much of his inspiration.

Taking his cues from the evocative singers and exacting tunesmiths of the golden age that produced the Great American Songbook, Ahart makes heartfelt, timeless music that’s rooted in pop and jazz tradition yet entirely his own, standing apart from transient trends to embrace timeless musical values. The result is an album that embodies the formidable combination of personal passion and disciplined craftsmanship that’s allowed the artist to carve out a distinctive musical identity out of time-honored musical elements.

Hailing from the unlikely environs of Austin, Texas – a musical mecca that’s not known for producing jazz-pop balladeers – Kevin Ahart is a consummate vocal interpreter with a knack for cutting straight to a song’s emotional heart. As comfortable performing with a spare two-piece combo as he is with a full orchestra, he possesses an effortless poise that many performers take decades to develop. Kevin’s vivid musical persona isn’t just a pose that he’s adopted. It’s an honest reflection of his attitude towards life, and of his abiding love for the music in which he’s been steeped since childhood.

In addition to showcasing the artist’s vocal skills, Let’s Take The World My Love also demonstrates his distinctive songwriting talent, with such original numbers as “The World My Love,” “A Heart That Will” and “You Drive Me Insane” serving as persuasive vehicles for his one-of-a-kind voice. The album’s originals were all composed by Ahart in collaboration with writing partner Jeff Franzel, whose resume includes work with such legends as Frank Sinatra, Sammy Davis Jr., and Mel Torme, and who’s written songs for the likes of Josh Groban, Placido Domingo, Shawn Colvin and Dianne Reeves. Franzel also plays piano and organ throughout the album.

Elsewhere on Let’s Take The World My Love, Ahart’s personally-charged readings of “I Can’t Make You Love Me” (performed here as a duet with Jane Monheit), Bill Withers’ ’70s classic “Ain’t No Sunshine,” the 1940s pop standard “You Always Hurt the One You Love” and the iconic Willie Nelson ballad “Nightlife” demonstrate his uncanny ability to lend new emotional insight to a wide array of material from different eras and genres.

Ahart traces the roots of his sensibility back to his childhood exposure to the Hollywood musicals of the 1940s and 1950s.“They immediately struck a chord in me,” he recalls, adding, “When I was in seventh grade, I was sick and tired of listening to what everyone else was listening to, and I really wanted a music of my own. One day, a musical called Anchors Aweigh came on TV, and there was a scene where Frank Sinatra was sitting in the Hollywood Bowl at a piano in a sailor suit, singing ‘I Fall In Love Too Easily.’ When I heard that, it was just the most beautiful thing I’d ever heard in my life, and it was a voice that I could identify with.”

By then, Kevin was already singing in his school choir. He achieved an early milestone when he performed the world-weary Sinatra chestnut “In the Wee Small Hours in the Morning” as his solo spot in a choir performance. “I went out there in white tails and black tie and sang it. That’s when the bug really hit me, and I started learning as many of the standards as I could. I listened to all of the records and typed out all of the lyrics, and created my own songbook to learn and study.

“For my entire life,” the singer notes, “I’ve always been kind of an old soul. I just never really felt comfortable just being just a kid and doing normal kid things. I just thought that it was beautiful music, and my ears tended to gravitate towards it. To me, it was poetry.”

Kevin performed his first professional gig at 18, singing in the dining room at his father’s country club with his high-school choir director accompanying him on piano. By 21, he’d established a reputation performing in local clubs and lounges. He also gained some crucial early studio experience, recording a pair of independently released CDs andworking behind the scenes on other performers’ projects.

After recording “Nightlife” and “I Can’t Make You Love Me” in New York with Phil Ramone and a studio band comprised of some notable veteran jazz players, Ahart journeyed to London, where he cut the remainder of Let’s Take The World My Love with Tim Ross and some of Britain’s leading young jazz musicians, as well as Jeff Franzel on piano and organ.

“I was so nervous about the prospect of working with Phil Ramone and singing with Jane Monheit and these heavy, heavy jazz players, but it turned out to be a great experience, and they were all so inspiring to work with,” Kevin notes. “Getting validation from people like that was a major confidence-builder for me. But it also said to me, ‘OK, now you’ve really got to prove yourself.’”

“Working in London with Tim Ross was also an amazing experience,” he continues. “It was just so inspiring to go over there and hear these songs that I’d written be turned into actual productions with a big band and strings, and I’m overjoyed at the way the tracks turned out.”

The resulting album offers a compelling evocation of Kevin Ahart’s iconoclastic musical philosophy. “I don’t really care about what’s considered pop today,” he states. “I know what’s right for me, and I have definite ideas of how I want to achieve that. I’ve got songs on here that I feel like I’ll be singing for the rest of my life, and I can honestly get behind every song on this album and say ‘This is me, take it or leave it.’

“I definitely do feel a responsibility to the tradition that originally inspired me to sing,” Kevin concludes. “I’m interested in adding something to that tradition. And if I can come up with just one song that can stand next to songs by Irving Berlin or Cole Porter, then I’ll feel like I’ve really achieved something.” Show less 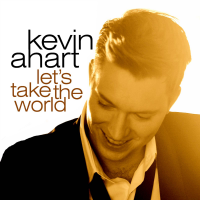 The World My Love

All About Jazz musician pages are maintained by musicians, publicists and trusted members like you. Interested? Tell us why you would like to improve the Kevin Ahart musician page.