Guitarist Kevin Golden has been playing jazz for over 29 years in the Hudson Valley and greater NYC area. His style is influenced by Grant Green, Rene Thomas, and Joshua Breakstone. He has studied with Joshua Breakstone, Peter Leitch, John Scofield, and Sal Salvador.

Kevin's first recording as a leader, “Pelham Parkway” has been released and available for digital download. The session was recorded along with the musical collaboration and contributions of Akiko Tsuruga on Hammond B3 organ and Peter Grant on drums, at Tedesco Studios in Paramus NJ. Seven original tunes penned by Golden pay homage to the legendary organ trio sounds of Grant Green, Kenny Burrell, and Wes Montgomery (san octaves).

For the past 8 years Kevin has collaborated with Steve Kaiser in multiple formats (duo, trio, quartet), playing the NYC club scene. The Steve Kaiser Quartet recorded “Say What You Mean” - original written by Golden which was featured on All About Jazz's website “Download of the Day”.

“A talented straight ahead guitarist, Kevin Golden has been performing in the New York area for nearly three decades. Pelham Parkway, which features seven of his original tunes, is his debut as a leader.

“A talented straight ahead guitarist, Kevin Golden has been performing in the New York area for nearly three decades. Pelham Parkway, which features seven of his original tunes, is his debut as a leader.

The opener, “Market Square,” utilizes the chord changes of a swing standard that was the theme song of a famous trombonist bandleader. It has been given a downward but cheerful melody that inspires inventive solos by Golden and Tsuruga along with a brief tradeoff with Grant. “Let’s Do This” is a minor-toned swinger that works particularly well with this group. “JJ’s Smove Groove” is a blues in a minor key that really grooves.

“Pelham Parkway” has Golden improvising some speedy guitar lines over the cooking rhythm section. “Where Are They Now” is a harmonically advanced ballad that is given a thoughtful and heartfelt statement from the guitarist. “Let’s Make The Time” has a melody that is so singable that lyrics should be written for it someday. The closer, “Cherry Pie,” finds the trio excelling on some funky soul jazz that is infectious but never predictable.

In addition to the excellent playing of the three musicians, Pelham Parkway is most notable for Kevin Golden’s compositions and the attractive group sound which updates the organ trio tradition. It is heartily recommended.”

Scott Yanow, jazz journalist/historian and author of 11 books including The Great Jazz Guitarists, The Jazz Singers, Jazz On Film and Jazz On Record 1917-76Type your paragraph here.

“Guitarist Golden is a musician who stands out as a fine player and has that hand strumming style (think Wes Montgomery) that is gentle when it can be and brutally powerful at the most unexpected moments.”.................John Book, The Run Off Groove #214

“……guitarist Kevin Golden whose pronounced play on the album makes him sort of the co-leader as his guitar shares much of the lead with Antonelli on the tenor. Co- written by guitarist Golden, “Golden Opportunity” opens up the program and this one features Golden, Antonelli and the drummer all delivering swinging solos.”………….Edward Blanco, ejazznews 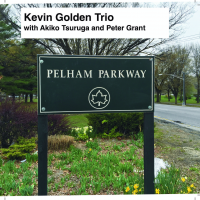 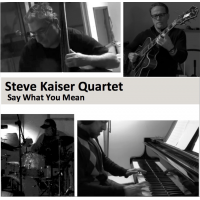 Say What You Mean

Say What You Mean

Kevin Golden
Say What You Mean

All About Jazz musician pages are maintained by musicians, publicists and trusted members like you. Interested? Tell us why you would like to improve the Kevin Golden musician page.