Kevin's interest in music started at a very early stage of life, and he began playing piano by ear at age 4. By seven, Kevin was performing professionally.

Throughout Kevin's music career he has warmed and shared stages with many noted performers including Ronnie Laws, B.B. King, and the Pointer Sisters to name a few. He has been retained to perform for President Barack Obama, Oprah Winfrey, Mayor Richard Daley, Rev. Jesse Jackson Sr., Congressman Jesse Jackson Jr., and Ambassador Carol Mosley Braun; and the list goes on.

Kevin is the proud Father of Nicole and Kevin Jr. and he simply adores his four grandchildren Timothy, Kevin, Amari and Nadia. Kevin is also the youngest of six.

Kevin gives all glory and gratitude for his talent to God! 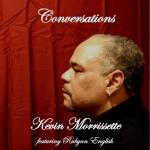 All About Jazz musician pages are maintained by musicians, publicists and trusted members like you. Interested? Tell us why you would like to improve the Kevin Morrissette musician page.