The career of KWT4 is long, varied and continues to evolve at every turn. Their music has captivated audiences throughout the United States. And has built a loyal following by never doing the same thing twice. Combining jazz with elements of R&B, and pop music. Tom Theabo has been a guitarist/arranger/writer for more than 35 years. A full time musician and teacher, his style is a unique voice in the jazz world and immediately recognizable. He has shared the stage with George Benson, Chuck Mangione and Gene Bertoncini. He continues to shape his artistry on guitar as well as an arranger and song writer. In 2000 and again in 2003, he toured Japan and helped to form the first “Fraternity of Musicians” between jazz musicians in Japan and the U.S. Kevin Wells first performed professionally in his home town of Chicago over 35 years ago. Playing Blues and R&B in smoky south side blues clubs as a high school student, before attending the University of Wisconsin Oshkosh. While in college, he met drummer Tony Taylor, and began playing in college talent shows and jam sessions. In 1980, together with Tom Theabo, Janet Planet and Dave Janke formed the R&B band, Body Talk. Afterwards, he performed with the progressive guitar rock band Maxgain. And then, as a founding member of the seven piece smooth jazz group Playtime. Most recently, he spent five years as a member of the Brenda Theabo Quartet, and then, as band leader of The Kevin Wells Project, which reunited the members of KWT4. Tony Taylor has perform with Chris Swanson and John Harmon on the 1985 release of “Sweet Thunder” . He also shared the stage with Chuck Mangione, as a member of the ground breaking Jazz fusion group “Fire and Ice” with John Harmon, saxophonist Tom Washaka, and bassist John Gibson. And now as the rhythmic backbone of KWT4. Tom Washatka s a multitalented instrumentalist/composer who has appeared in a variety of musical forums. Some of his recording/performing experiences include working with John Harmon in a group called “Fire and Ice”. Formed in 1980, the group released its first album in 1983. Tom provided the title cut for the popular album; “Island Dancer”. In 1992 he joined Madison WI based latin-jazz group, Madisalsa, and performed with the critically-acclaimed band for 11 years. In 1985 Fire and Ice teamed up with Grammy nominee, Chris Swansen, added a vocalist, Janet Planet, and guitarist Tom Theabo, and recorded the highly acclaimed album “Sweet Thunder in 1985. Since then, Tom has continued to write and record albums for his own record label “Stellar Records”. His cd “Easy To Love”, released in 1999, has gained rave reviews abroad. “Washatka plays with the enthusiasm of the hard bop masters, his solo explorations are full of new ideas and he is a quality writer who's compositions have a lot of meat on their bones.” Cadence Magazine

In the year 2000 Tom traveled to Japan to be part of the formation of the first Fraternity of Jazz Musicians between Nagasaki and the Fox Cities.

Tom's performance experience ranges from Symphony Orchestras to opening for Super Sax, Weather Report, Freddie Hubbard and Tito Puente. As well as touring with his own quartet.

Tom is co-owner and composer for one of the most popular music libraries “Narrator Tracks Music”. His award winning music has been featured in movies as far away as Australia and P.B.S. specials across the U.S. In addition to writing he is an engineer and producer for Stellar Records/Steel Moon recording studio. In 2007 Stellar Records recording artist/vocalist, Nancy King, was nominated for a Grammy. Show less

Kevin Wells bass, electric
“One of the real joys in listening to jazz has been the times when there is wonderful musical empathy and compatibility among and between players,” he said. “KWT4 manages to bring forth marvelous creative energy in the varied and diverse grooves, be they swing, Latin, blues or rock. Hearing them is always a pleasure and a treat.” 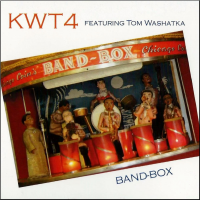 All About Jazz musician pages are maintained by musicians, publicists and trusted members like you. Interested? Tell us why you would like to improve the Kevin Wells musician page.