Kristoffer Gori Verdoner is a Danish guitarist and composer. He is easily recognisable by his sound, voicing, and ideas. His unselfish nature brings out the best in each musician, while his purposeful spaces in songs allows the music to blossom in a captivating manner. Kristoffer composes unique music, drawing on influences from his experiences with musicians from all over Europe, USA, Brazil, Cuba, Mali.

Despite his young age, Kristoffer has established a good name for himself and has already one solo record on his shoulder. May 14th 2015 Kristoffer released his debut album, Frigga Feetless & Friends, which is a collaboration between musicians from Denmark, Estonia and USA. He made it to the semifinals of the Danish Youth Jazz Competition in 2014, along with the quartet Frigga Feetless, with whom he also plays his original music.

Kristoffer has also performed alongside Live Foyn Friis, Trepac, Black El, Peaceful James, Rasmus Thude and other well known artists from various genres. He has played in countries ranging from Denmark, Germany, Poland, and the USA. Festivals have also been a common place in Kristoffer’s repertoire, with his performances at numerous festivals in Denmark – Vinterjazz, Aarhus Jazzfestival, SPOT-festival, RAMA-festival, Aarhus Took It, Langelandsfestival, Tunøfestival, Grenå Beach party and on The Voice (radio).

Kristoffer is graduating as a Cand.Musicae (performance) this summer, from the Royal Academy of Music in Aarhus, Denmark

. He has also studied at the Butler School of Music in the University of Texas at Austin. Show less 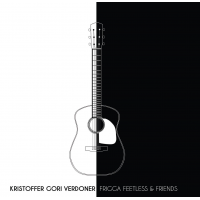 All About Jazz musician pages are maintained by musicians, publicists and trusted members like you. Interested? Tell us why you would like to improve the Kristoffer Gori Verdoner musician page.