I am a drummer, percussionist, producer, mix engineer, UI/UX and graphic designer. I currently live in New Orleans, LA and work as UI/UX Lead at Presonus Audio Electronics. I've been performing and recording music for over 20 years. I graduated from Roanoke College in Salem VA in 1998 with a BA in Music. From there I went on to tour nationally with my group Rebus based out of Northern Virginia. Rebus developed in the burgeoning “Jamband” scene and shared the stage with groups like Jacob Fred Jazz Odyssey, Benevento/Russo Duo, The Slip, Fat Mama, Ulu, The Miracle Orchestra, and played festivals like High Sierra Music Festival as well as famed venues like The Wetlands Preserve in NYC. Performing music that was highly focused on improvisation Rebus was able to establish a nice niche in the community bridging the gap between improv and songwriting. In 2002 I moved to Augusta, GA to pursue teaching drums, run a recording studio, performing locally and just live life “off the road.” While in Augusta I founded Moniker with Eric Kinlaw and Andrew Crater. We recorded two albums of improvised material (performed with movies) and performed regularly in town for years. Running “Rebus Studios” in Augusta I worked with artists like Shaun Piazza Band, Eryn Eubanks & the Family Fold, The Cubists, and MANY more. While in Augusta I also completed a course through Berklee College of Music in Mixing and Mastering. Around 2005 I was asked to join a local group of musicians known as Ed Turner & Number 9 to perform a tribute to the Beatles album Rubber Soul. After months of preparation and serious scrutiny over the musical presentation of the album we performed two sold out shows playing not only Rubber Soul, but also 2 other sets each night of other Beatles and solo Beatles members material. Over the course of a few years I was lucky enough to join the group in not only performances of Rubber Soul, but also Revolver. We were lucky enough to be able to document the performances and the time spent learning this material was invaluable to my development as a musician and bandmate. In 2007 I was offered the opportunity to move to Greensboro, NC to open a new recording studio where I could teach drums/percussion and recording techniques. After about a year I was offered a job at Notion Music, Inc. as a Sound Editor. Over the next year or two I would phase out of my work at the teaching/recording studio and make Notion my full time job. Around this time I met the guys in Hot Politics and began joining them on percussion for gigs. Shortly after recording and mixing the EP “Get Loose” I was began gigging full time with the group on drums. From 2009-2011 I performed and recorded with Hot Politics all around NC and VA. At the Notion Christmas party in 2008 I was propositioned by Ben Singer to bring my drums out for a “jam” (the jam actually included Roy “Futureman” Wooten as well!) That was unofficially the beginning of “Modern Robot.” We decided to get together and write some material and come up with some arrangements/covers so we could begin to gig out. Around the same time I mentioned that we should try the idea of the “improvised soundtrack” I had explored with Moniker. We recorded our album “Liminal Event” and while we did perform our original material out it was clear that the improvised movies were really unique and something that we wanted to explore more deeply. Ben had been recording the performances and then syncing them post with the movies we were performing to.

Some time around the end of 2010 through my good friend and bassist Leo Kishore I was introduced to Bon Lozaga(PM Gong/Gongzilla) about joining his group Tiny Boxes. From 2010 through 2013 I performed, toured and recorded with Tiny Boxes. This group was a powerhouse consisting of Leo Kishore (bass, vocals), Matt Williams (violin, guitar, vocals), and Bon Lozaga (guitar, vocals). In 2012 we recorded the EP “Tiny EP” at Old House Studios in Charlotte, NC. Performing with Tiny Boxes allowed me the opportunity to play with some truly amazing musicians like Joel Cummins and Jake Cunninger (Umphrey's McGee), Fareed Haque (Garaj Mahal/Sting/etc.), Andre Cholmondeley (Project/Object), Nigel Hall (Warren Haynes Band, Lettuce, Soulive, etc..), Jennifer Hartswick (Trey Anastasio Band), Joey Porter and Dave Watts (The Motet), Mike Dillon Band, Living Colour, Ryan Martinie (Mudvayne) and many many others. Playing with the guys in Tiny Boxes was truly an inspiring journey and learning from Bon was something I wouldn't trade for anything.

Over the course of this time that I was performing and recording with Hot Politics, Modern Robot, and Tiny Boxes I was also working full time with Notion, and over this time I transitioned from working as a sound editor to Marketing and UI/Design. Notion had become a lean machine and everyone participated in nearly all aspects of running the company.

At the end of 2013 Notion Music was acquired by Presonus Audio Electronics and I was offered the position of “Visual Interaction Designer.” Along with the position I was offered the opportunity to move down to Baton Rouge, LA to be a part of the team. Given the fact that this would offer me more opportunity to participate in designing software for Presonus it was an opportunity I simply couldn't pass up. In the spring of 2014 my wife and I moved down to Baton Rouge, LA! After spending a year in Baton Rouge we moved to New Orleans and while we've only been here a year it truly feels like home.

In 2016 I put together the group Think Less, Hear More. The concept focuses on an approach that is more akin to spontaneous composing than free improvisation. While the players watch and cue off of the plot/movement/emotions of the movie there is no real effort to play the actual score. The best way to enjoy this experience is to literally Think Less, and Hear More. Let go any preconceived notions you may have about the movie being performed and experience the performance in the moment with the players and crowd. The core group (in addition to myself) is David Ginger (trombone), Will Feinberg (keyboards), Quinn Sternberg (bass) and Smokey Brown (guitar). We’ve been truly lucky to be joined by some amazing musicians: Cyrus Nabipoor, Rob Kellner, Andriu Yanovski, Dan Oestreicher, Josh Paxton, Nick Benoit, Jeff Albert, Tristan Gianola, Matt Booth, Byron Asher, Brad Webb, Ryan Scott Long, Mike Sopko, and Cliff Hines.

In July of 2019 I also released my first solo album “Notes Can Weigh a Ton.” This is a collection of compositions (and one cover) that I’ve been collecting over the past 15 years. Finding myself without a group to write original music I decided it was a perfect time to get these songs recorded and released. While the process took nearly two years it was truly enjoyable with no deadlines or creative constraints. I couldn’t be happier with the outcome. Show less 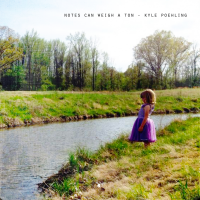 Notes Can Weigh A Ton

All About Jazz musician pages are maintained by musicians, publicists and trusted members like you. Interested? Tell us why you would like to improve the Kyle Poehling musician page.