Lafayette Harris’s accomplishments speak for themselves. Known as the “go to” pianist by other musicians and band leaders, in the last year alone, Lafayette has performed on Broadway with the THE COLOR PURPLE, toured Europe with Ernestine Anderson, played the wedding for the daughter of ABC “World News Tonight” host, Charlie Gibson and helped raise money for children with cancer in Columbus, OH. Alongside these have been Lafayette’s regular appearances at New York’s Blue Note and weekly open mic session that he hosts at the historic Lenox Lounge in Harlem, widely regarded as the “best vocal jam session” in the city by New York’s weekly listing guides. In between all this, Lafayette has managed to record two new albums in the last year �” TRIO TALK, a jazz trio outing and a contemporary funk/fusion project, IN THE MIDDLE OF THE NIGHT.

However, before the A-list musician lifestyle, Lafayette’s formative years were spent in Baltimore, laying the foundation to his craft at church and in private tutelage. By the time he hit his teens Lafayette was a regular on the local Top 40 scene, playing in bands that covered all the classic R&B and funk of the day by acts such as the Ohio Players, Parliament/Funkadelic, the Gap Band and more. However, Lafayette’s heart was very much rooted in jazz and his real hero was fellow Baltimore native Eubie Blake. After hearing Blake play Scott Joplin’s “Maple Leaf Rag” Lafayette was determined to perfect it. He augmented his live work with hard study, receiving a Bachelor of Music from Oberlin Conservatory and then going on to study with master pianist Kenny Barron at Rutgers University in NJ, where he earned a Masters in Jazz Performance.

Moving to New York in the mid 80’s Lafayette was swept into the intense musical whirlpool that was the Big Apple live scene at that time. Working in well established clubs like the Blue Note, Sweet Basil, and Fat Tuesday’s, the young musician soon garnered a reputation for himself as a name to watch. That reputation earned Lafayette a record deal with Muse Records, resulting in his debut album, aptly titled “Lafayette Is Here,” featuring then young lions, Terell Stafford (trumpet), Don Braden (tenor saxophone) and rhythm section-mates Lonnie Plaxico (bass) and Cindy Blackman (drums). A second Muse recording, “Happy Together,” starred The Lafayette Harris Trio plus Melba Moore.

By the early 90’s Lafayette had also become a regular on the European jazz festival circuit, playing alongside the likes of trombonists Slide Hampton and John Gordon and the vocalist Barbara Morrison. Also during this period his former teacher Kenny Barron referred him to master drummer Max Roach. This new relationship resulted in almost 10 years of touring and collaborating with the legendary drummer, prompting him to describe Lafayette as a “phenomenal new voice on the music scene today.”

By the early 90’s Lafayette had also become a regular on the European jazz festival circuit, playing alongside the likes of trombonists Slide Hampton and John Gordon and the vocalist Barbara Morrison. Also during this period his former teacher Kenny Barron referred him to master drummer Max Roach. This new relationship resulted in almost 10 years of touring and collaborating with the legendary drummer, prompting him to describe Lafayette as a “phenomenal new voice on the music scene today.”

During the “Bring In 'Da Noise…” period, Lafayette was invited to play at a fundraiser for underprivileged children at the home of the late news anchor, Peter Jennings. The band comprised Illinois Jacquet, Percy Heath, Max Roach and Wynton Marsalis. Lafayette’s debut release on his own label, Airmen Records, “Lafayette Is Here…Solo” was voted one of the best recordings of 1998 by Cadence Magazine. By the new millennium Lafayette was recruited by guitarist Mark Whitfield to form the group Soul Conversation for Herbie Hancock’s label. Other names Lafayette has played with in recent years include R&B/Broadway diva Jennifer Holliday, jazz legend Billy Taylor and Grammy nominee Ernestine Anderson.

Says Lafayette with trademark modesty of his long, illustrious career: “For me it’s definitely great to do something you love and make a living at it. To be able to have a family and a roof over my head because of my success in music is a blessing. If I can keep contributing to the world’s musical sound palette I’ll be satisfied as a musician. When I look at the successes of past and present greats from Duke Ellington to Miles Davis to Herbie Hancock and others, I am amazed at their ability to continue being creative and significant and I’m instantly inspired.” Show less 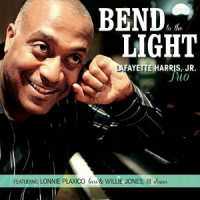 Bend To The Light 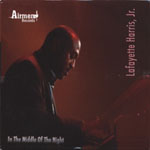 All About Jazz musician pages are maintained by musicians, publicists and trusted members like you. Interested? Tell us why you would like to improve the Lafayette Harris, Jr. musician page.