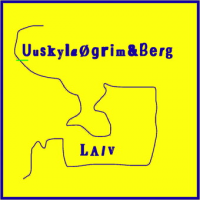 Eleven months after the debut ULLR, Uuskyla Øgrim & Berg releases LAIV When you have struck a rich ore, you should keep on digging. That goes for gold hunters as well as musicians. It has been only 11 months since Anders Berg and Tellef Øgrim teamed up with veteran free-jazz drummer Peeter Uuskyla to put out the debut album ULLR. The collection of six short, hard-hitting tracks got the attention from the impro press, resulting in statements as: – Ullr is an engaging, captivating, and often unrivalled listen. – This is very personal music, which captivates both the brain, heart and feet. – Uuskyla’s trio is taut and metallic, sprung, flexed and sinuous, hitting hard on the recoil. Several months after ULLR, Tellef was contacted by BrÖtz (brotznow.se) in Gothenburg. The dry message was that the caller had taken over the booking of the club and that he had a... more credits released November 24, 2017

All About Jazz musician pages are maintained by musicians, publicists and trusted members like you. Interested? Tell us why you would like to improve the LAIV musician page.