Laura Crema imbues well-worn standards and eclectic originals with an uncanny combination of sensuality, originality and sheer musical prowess has dazzled listeners and audiences alike making her one of the most respected interpreters of song and rising stars within the Canadian jazz scene.

A native of Vancouver, vocalist Laura Crema possesses a lush, unique instrument with great depth and resonance; her influences are broad and diverse as she blends jazz with popular music and improvisation.

Not just a gifted vocalist, Laura is also an accomplished dancer, choreographer and interdisciplinary performer having received numerous awards and grants including an “Emergence” Canada Council Grant for her work in the interdisciplinary arts. She has performed and worked with RADIX Theatre, the Karen Jamieson Dance Company, Touchstone Theatre, Olivia Thorvaldson, Grant Strate, Deborah Dunn, and Catherine Lee.

In keeping with the performing arts Laura has presented her own Choreography at “Dancing on the Edge”, “Women in View” and the “Single Solos Dance” Festivals; Laura has also worked with well known composers including, Jeff Corness, Peter Hannan, Ron Samworth, Cam Wilson and George McFetridge.

Some of Laura's “live” highlights as a jazz artist include being a featured vocalist at the 2001 DIVAS FOR LIFE concert benefit at the Vogue Theatre in Vancouver and numerous CBC radio appearances on such programs as Studio One, Hot Air, After Hours, Coastal Grooves, Richardson's Roundup, and North by Northwest.

Laura's third release “Almost Blue” was released under the Maximum Jazz /Universal Music labels and has received excellent reviews and airplay across Canada, the U.S., and Europe; a highlight was a feature in Air Canada's En' Route magazine.

Fast forward to today and Laura's brand new release “Spring Is Here”, is scheduled to be released in Canada on October 30, 2007 on the Maximum Jazz label and distributed EMI Music. The vocalist's latest disk shows her continuing to develop her unique musical voice and is produced by the accomplished musician, composer and producer Brad Turner and also features the stellar musicianship of Bill Coon, George McFetridge and Brad Turner.

The 12 track disk is a collection of songs ranging from Billy Strayhorn’s, “A Flower is a Lovesome Thing”, to the Beatles’ “Blackbird”. The opening “A Flower is a Lovesome Thing” introduces the listeners to Crema’s remarkably evocative and resonant voice. The two duets on the album are a truly beautiful rendition of the Brighetti/Martino classic “Estate”, where Crema sings the original Italian lyrics with Bill Coon masterfully accompanying her on the hauntingly beautiful “Tenderly”.

Other highlights include Brad Turner’s trumpet solo on Cole Porter’s, “So In Love”, his inventive flugelhorn playing on “Autumn Serenade” and the band’s heartfelt reading of “A Ghost of a chance”.

“Spring is Here” is a beautiful disk showcasing Crema’s remarkable voice as a storyteller and musical seamstress. Her voice draws the listener deep into a musical journey celebrating beauty and the discoveries of the heart. Show less

Maximum Jazz Together with EMI Music Announce the Release of Laura...

“Vocalist Laura Crema is poised to take center-stage on the international jazz scene. Possessed of a powerful voice with great depth and resonance, she brings a warm and strongly emotive approach to classic torch songs.” (Flutenotes)

“Laura Crema’s sultry vocals pull you deep into the dark, smoky room of some 40’s speakeasy where torch songs spoke volumes from the heart...unadulterated musical silk, and not to be missed.” (CBC Radio)

“A lush, unique instrument, with an affinity for ballads, such as the CD’s stunning title track.” (Planet Jazz)

“Crema is a true artist,…she knows when to hold the note like a longing memory and when to let it go like a painful betrayal.” (All About Jazz) 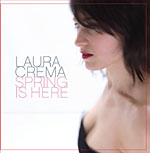 Mysteries Of The Revolution
band/orchestra

All About Jazz musician pages are maintained by musicians, publicists and trusted members like you. Interested? Tell us why you would like to improve the Laura Crema musician page.