More than any other black folk-blues artist of his time Leadbelly helped expose his race's vast musical riches to white America, and, in the process, helped preserve a folk legacy that has become a significant part of the nation's musical treasury. He was not a blues singer in the traditional sense; he also sang spirituals, pop, field and prison hollers, cowboy and childrens songs, dance tunes and folk ballads, and of course his own topical compositions. It has been said his repertoire was at least 500 songs. He never saw any commercial success during his lifetime. Not until after his death did a broader public come to know his songs and the amazing story of his life.

Huddie William Ledbetter was born on January 29, 1889 on the Jeter Plantation near Mooringsport, Louisiana. He was the only child of sharecropper parents Wesley and Sally. Huddie and his parents moved to Leigh, Texas when he was five and it was there that he became interested in music, encouraged by his uncle Terrell who bought Huddie his first musical instrument, an accordion.

Over the years he became fluent on the piano, harp, mandolin and harmonica but he is best remembered for his 12 string guitar. By the age of 18 he had two children and had smashed his father over the head with a poker during an argument.

Though little is known about Leadbelly's early life - he rarely spoke of those days - he left home at 20 and over the next ten years wandered throughout the southwest eking out an existence by playing guitar when he could and working as a laborer when he had to. Sometime around 1915 he met the seminal Texas bluesman Blind Lemon Jefferson and worked and traveled with him as his “lead boy” (guide, companion and protégé) on the streets of Dallas.

By this time, Leadbelly had settled on the twelve-string guitar as his instrument of choice. Leadbelly also developed a wonderfully rhythmic guitar style in which he imitated the walking bass figures commonly employed by barrelhouse piano players on Fannin Street, the most celebrated street in Shreveport's red-light district, where Leadbelly was known to have worked.

In 1916 Huddie was jailed in Texas for assaulting a woman. He escaped and spent two years under the alias of Walter Boyd before killing a man in a fight and being sentenced to thirty years hard labor in Texas' Shaw State Prison Farm. After seven years he was released after begging pardon from the governor with a song. Huddie left Huntsville a free man, but in 1930 he was again convicted of attempted homicide.

It was in the Louisiana State Penitentiary in July 1933 that Huddie met folklorist John Lomax and his son Alan who were touring the south for the Library of Congress, collecting unwritten ballads and folk songs using the newly available recording technology. The Lomaxes had discovered that Southern prisons were among the best places to collect work songs, ballads and spirituals and Leadbelly, as he now called himself, was a particular find.

Over the next few days the Lomaxes recorded hundreds of songs. When they returned in the summer of 1934 for more recordings Leadbelly told them of his pardon in Texas. In 1935 Lomax took Leadbelly North as his chauffeur and he began performing to an appreciative new audience in the leftist folk community, befriending the likes of Woody Guthrie and Pete Seeger. In his later years, like Guthrie, he performed for political rallies and labor unions. From 1937 to 1939, he made more recordings for the Library of Congress.His keening, high- pitched vocals and powerful, percussive guitar playing commanded attention, and he became known as “the King of the Twelve-String Guitar.”

By 1940 Leadbelly had recorded for a variety of labels, including Folkways and he performed tirelessly. Recordings for RCA (with the Golden Gate Quartet backing on many tracks), for the Library of Congress (with Alan Lomax supervising) and for Moe Asch, filled in the now busy schedule. The RCA sessions in particular were superb, and issued on media and packaging of outstanding quality for the time. Asch would go on to found Folkways Records, struggling through some hard times in the industry, and become Huddie's principal recorder and issuer. Neither Leadbelly nor Asch ever made much money from these recordings, though, and by 1944 Leadbelly was restless. Hollywood took his fancy.

Leadbelly headed out to Hollywood in hope of landing a part there, he was soon disillusioned, but made a reasonable living playing the club circuits. He also had the opportunity to record some material for Capitol records, unusually backed by zither, including some rare piano rags very seldom featured in his repertoire.

The Capitol sessions remain some of Leadbelly's best recorded work, especially since the recording technology used was the best he had yet been subjected to. He also gained some radio airplay - including some children's music for Standard Oil - retained hopes of landing a movie part, and did some concert tours in parts of the West. But he had tired of the West by late 1946, and set off for New York once more.

Leadbelly returned to renewed interest in his music, buoyed by the revival of dixieland jazz, and interest in the origins of roots music forms. A book of essays titled “A Tribute to Huddie Ledbetter” had been published in England in 1946, and he found steady (but not lucrative) work playing the jazz clubs, and occasional concerts. By now he had come to keenly resent the “convict” image that he had acquired since his initial “discovery” and arrival in New York, but found it impossible to shake off. Back in New York from 1946 on, Leadbelly continued to record for Folkways, his 1948 recordings later turning up on a series of LPs called “Leadbelly's Last Sessions” and gathered together into a four-CD box set by Smithsonian/Folkways in 1994. This is considered to be his defining moment.

He toured briefly in France, where jazz had become hugely popular, in early 1949. While in Paris, persistent muscle problems led to a diagnosis of Lous Gehrig's disease - amyotrophic lateral sclerosis. Some six months later he succumbed to the disorder, on December 6, 1949. In 1950, his trademark song “Goodnight Irene”, which he had learned from his uncle Bob Ledbetter, became a nationwide number one hit for the Weavers. Show less

Lead Belly: A Life in Pictures 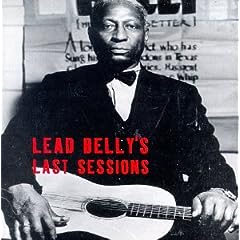 
Masters Of The Blues...

All About Jazz musician pages are maintained by musicians, publicists and trusted members like you. Interested? Tell us why you would like to improve the Leadbelly musician page.