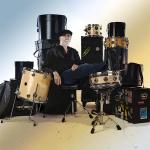 I have been playing drums professionally for over 39 years.

During that time, I have played just about every style of music, i.e. rock, blues, jazz, country, gospel, folk etc.

I have national and international touring experience with both Chuck Leavell and Curtis Mayfield. While with Curtis, I did 6 European tours including the Montreux Jazz Festival in Switzerland, Expo '90 in Japan, and toured extensively within the US. In addition, I performed in “live” TV and radio broacasts and video taping.

. I am also a PRO-MARK drumsticks endorser.

I have been teaching private lessons for over 25 years. Lessons are $45/hr Available hours are flexible.

All About Jazz musician pages are maintained by musicians, publicists and trusted members like you. Interested? Tell us why you would like to improve the Lee Goodness musician page.