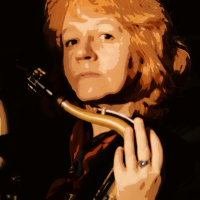 Tenor saxist and composer Lena Bloch has a gorgeously warm and mellifluous tone, sort of a mix between Lester Young and Warne Marsh, and she uses it to excellent effect.
—George W. Harris, Jazz Weekly

“In jazz”, muses Lena Bloch, “many things come together that are thought of as opposites: mind and feeling, responsibility and abandonment, looseness and precision, improvisation and composition. I just love that.”

Lena’s love for jazz has taken her on a challenging and circuitous voyage. Born in Moscow, Russia, Lena Bloch immigrated to Israel and moved to Europe in 1990, where she became a part of the European jazz scene (Germany and Holland) for 12 years, finally came to the United States, earning Master’s Degree in Composition and moved to Brooklyn, NY in 2008, where she quickly became a contributor to one of the most fertile and interesting jazz scenes of recent memory. As a long-time disciple of Lee Konitz, Lena is an improviser, dedicated to spontaneity and precision. She has collaborated with former students of Lennie Tristano: Connie Crothers, Ted Brown, Harvey Diamond, Joe Solomon, Charles Sibirsky, as well as with younger players like herself, who are contributing to the development of the tradition of spontaneous improvising and open musical communication: Roberta Piket, Dan Tepfer, Brad Linde, Sarah Hughes and others. During her first years in Brooklyn Lena was featured in the “Four Extraordinary Women In Jazz” workshop/performance (with Connie Crothers) and in the Lester Young 100’s Birthday Concert (with Ted Brown and Chris Byars, Smalls Jazz Club)

. She was a frontman in Vishnu Wood Quartet (2008-2014) and performed with this group at several festivals (with Vishnu Wood, James Weidman, Bertha Hope, Makaya MacCraven, R J Miller). Lena has been a part of Lady Got Chops festival (NY State) with groups led by Mala Waldron, Sumi Tonooka, Kim Clarke. Other musicians Lena has worked with, are Arturo O’Farrill, George Schuller, Putter Smith, Bill Wurtzel, Scott Wendholt and many others. In 2014 Lena Bloch was invited as a soloist with New York Chamber Players Orchestra, performing the concerto for alto saxophone and orchestra by Eric Koenig at the Merkin Concert Hall. 5 years ago Lena’s own project came to life, when she met the nucleus of her recent quartet: bassist Cameron Brown and drummer Billy Mintz, both stellar musicians with tremendous experience and deep understanding of music. With these colleagues and a very talented young guitarist from Chicago, Dave Miller, Lena recorded her first album as a leader. The album “Feathery” was top-rated in Downbeat Magazine, Pop Culture Classics, Jazz Inside Magazine, New York City Jazz Record, France Musique, Canadian Audiophile, Music Charts Magazine – and was voted the best debut release of 2014 by Dan Morgenstern, as well as one of the top 10 Jazz Albums 2014 (Just Jazz, USA) and top 50 Jazz Albums 2014 (JazzLinks, Austria-Germany). After Miller’s departure from NYC, Lena’s quartet took a different turn, when in 2014 pianist and composer Russ Lossing joined the group. Lena Bloch Quartet, called Feathery, has been performing regularly since then, presenting original music, written by Lena and Russ. The quartet has performed in various New York City and Brooklyn concert spaces and jazz clubs, has released its album “Heart Knows” in 2017 (Fresh Sound Records) and was selected to perform at the showcase for the 40th National Chamber Music Conference in NYC (2018). More to come… Lena’s inspirations and interests come from her musical experience and study with masters. She studied with Yusef Lateef in Massachusetts, Kaveh Dalir-Azar from Iran in Germany, David Liebman in his European workshops, Dave Holland and Joe Lovano in Banff Canada, and, most notably, with Lee Konitz, whom she met in 2001 in Cologne. She acquired her Artist Diploma from Cologne Conservatory (Germany), where her teachers were Keith Copeland and John Marshall, with whom she also performed with her quartet. In Europe Lena Bloch has met and performed with fabulous jazz musicians and masters, such as Mal Waldron, Johnny Griffin, Horace Parlan, Alvin Queen, Jurai Stanik. In 2000-2002 she was the saxophonist and composer with the legendary jazz percussionist Steve Reid (album “Live In Europe”, Mustevic Records, 2000), along with Boris Netsvetaev and Chris Lachotta. In 2003, graduate school followed – Master’s Degree in Composition and teaching assistantship at the University of Massachusetts Amherst – study with Salvatore Macchia and Jeff Holmes. She played the first tenor chair in the Jazz Ensemble and got a “Downbeat Student Award” 2005 and MENC Award 2004 in Minneapolis. With her unique cultural background, Lena is working in a “singular manner” (as Mark Keresman of NYC Jazz Record puts it), towards an original style and very personal expression. Her inspirations range from Eastern European and Middle Eastern tradition to 20th-21st Century and Western classical music. Lena is also an active instructor and clinician, teaching woodwinds and improvisation, member of Jazz Education Network, New Music USA and Chamber Music America. She served as a panelist for National Endowment for the Arts in 2015. Currently a faculty member at Slope Music, Brooklyn. Selected festivals: Red Sea Jazz Festival – Eilat, Israel 1990, Leipziger Jazz Newcomers Competition, winner – Lepzig, Germany 1999, Leverkusener Jazz Tage – Leverkusen, Germany, 2000, Ingolstadter Jazz Tage – Ingolstadt, Germany, 2001, Jazz Lent Maribor (with Alvin Queen) – Slovenia 2002, Voronezh Jazz Festival – Russia 2002, Women In Jazz Festival – Amherst MA USA 2004, Lady Got Chops Festival – New York City NY USA, 2010 and 2011, Temple Of The Arts Jazz Festival – 2010, 2011, 2012, Washington Women in Jazz Festival (soloist with Brad Linde Ensemble) – 2015, 40th National Chamber Music Conference – showcase with Feathery Quartet – 2018.

”Lena's unique selling point is that she has managed to unite an instrumental voice and a compositional voice into a single means of expression. Normally, this is another form of exile, the distance between the emotions and thoughts one has, and the ability to express them. But Lena, to abandon formality, has abolished that distance. It is music about life, a continuous suite of dances and narratives, the voice of someone telling her and their story, arrestingly and thoughtfully”. - Brian Morton, “Rose Of Lifta” liner notes (to be released)

“The stunning thing about every performance here is the delicate blend of composed music and spontaneous invention.” — Donald Elfman, NYC Jazz Record

“Not a single note is ever wasted

”Lena's unique selling point is that she has managed to unite an instrumental voice and a compositional voice into a single means of expression. Normally, this is another form of exile, the distance between the emotions and thoughts one has, and the ability to express them. But Lena, to abandon formality, has abolished that distance. It is music about life, a continuous suite of dances and narratives, the voice of someone telling her and their story, arrestingly and thoughtfully”. - Brian Morton, “Rose Of Lifta” liner notes (to be released)

“The stunning thing about every performance here is the delicate blend of composed music and spontaneous invention.” — Donald Elfman, NYC Jazz Record

“Not a single note is ever wasted. This is Free Jazz in every sense of the word.” – Fritz Balwit, Audiophile Audition

“…unwaveringly cohesive…bone-deep gorgeousness…complex, compelling and beautiful, sounds of the highest quality and inspiration laid down by a premier jazz quartet.”—Dan McClenaghan, All About Jazz

“Her instincts point to ingenuity in all things.” - Jordan Richardson, Canadian Audiophile

“Deliberate in the extreme, waiting for the right moments to drop flowing lines, and rewards the listener when those opportunities arise.” – Pete Fenech, Downbeat Magazine

“Lena is an amazingly gifted and soulful musician who can eat most of her peer saxophonists on this planet for breakfast, lunch and dinner in one gulp. She can also swing you into bad health with any musical offering she wishes to perform.” – Keith Copeland, jazz percussionist

“Highly recommended for anyone with an interest in innovative sounds.” – Andrew Ansbach

Masterclass "Some mental aspects of improvising music and stress management" Masterclass on improvisation and jazz harmony Emphasis: "Contemporary aspects of Lennie Tristano's teaching legacy" topics covered: • the importance and meaning of learning fundamentals of music for an improvising artist • how to learn and practice a "new" tune • how to practice tonal and rhythmic material at home • some special techniques and exercises towards better sense of melody and rhythm • psychological obstacles in improvising/performing and how to deal with them.

All About Jazz musician pages are maintained by musicians, publicists and trusted members like you. Interested? Tell us why you would like to improve the Lena Bloch musician page.