Lena Horne, the beautiful, elegant, talented singer and actress has become a legend. Her strong sense of her own identity, of justice, and of dignity forced her to struggle against social adversity, and allowed her to triumph. Music is just a part of her story.

Lena Mary Calhoun Horne was born on June 30, 1917, in the Bedford-Stuyvesant neighborhood of Brooklyn, New York, her parents separated by the time she was three years old, and she lived for several years with her paternal grandparents. Her early life was nomadic: Horne's mother, who was a fairly unsuccessful stage performer, took the young Lena on the road with her, and they lived in various parts of the South before returning to Horne's grandparents' home in Brooklyn in 1931

Horne had early ambitions to be a performer--against the wishes of her family, who believed that she should aspire to greater heights. Nevertheless, Lena persisted, and in 1933 she began her first professional engagement, at the Cotton Club, the famed Harlem nightclub. She sang in the chorus, and though only sixteen years old, held her own among the older and more experienced cast members. She soon left high school to devote herself to her stage career.

In 1934 Horne had a small role in an all-black Broadway show called ‘Dance with Your Gods.’ The next year, she left the Cotton Club and began performing as the featured singer with Noble Sissle's Society Orchestra under the name “Helena Horne,” which Sissle thought more glamorous than “Lena.” In 1937 Horne quit her tour with the Sissle Orchestra to marry Louis Jones, a friend of her father. During this short and troubled marriage, Horne went to Hollywood to appear in an all-black film called ‘The Duke Is Tops.’ In 1939 she had a role in the musical revue ‘Blackbirds of 1939’ at the Hudson Theatre in New York City; it ran for only eight nights. Before her marriage to Jones ended in divorce, she had two children, Gail and Edwin (”Teddy”).

Horne left Jones in 1940, taking a job as a singer with Charlie Barnet's band and going out on tour with him. Horne was the only black member of the ensemble, and the kind of racial discrimination she encountered from audiences, hotel managers, and others was so unsettling that she decided to quit the band. In 1941, she began performing at the Cafe Society Downtown, a club in New York City that catered to intellectuals and social activists, both black and white.At the Cafe Society, Horne learned about black history, politics, and culture and developed a new appreciation for her heritage. From this point on, Horne became a significant voice in the struggle for equality and justice for blacks in America.

The summer of 1941, found Horne moving to California. She was signed by RCA and in December 1941 cut eight songs for her first solo album, “Moanin' Low.” Among its selections were songs she would sing throughout her career, including “Stormy Weather,” and “The Man I Love.” In 1942, she signed a seven-year contract with MGM--the first black woman since 1915 to sign a term contract with a film studio. Horne appeared in the all-black film musicals ‘Cabin in the Sky’ and ‘Stormy Weather,’ both released in 1943, but she refused to take on any roles that were demeaning to her as a woman of color..”

In the fall of 1947, Horne went to Europe with Lennie Hayton, who was her pianist, arranger, conductor, and manager. They were married in December in Paris because he was white, and interracial marriages were against the law in California. In the early 1950s, Horne, along with many of her colleagues, was a victim of the anti-Communist “witch hunts” that successfully blacklisted performers who were thought to have ties to Communist organizations or activities. The blacklisting hurt Horne's career and kept her from appearing on radio and television. By the mid-1950s, though, Horne was cleared of these charges. In 1956, she signed a recording contract with RCA Victor. Her albums included “Stormy Weather,” “Lena Horne at the Coconut Grove,” and “Lena Horne at the Waldorf-Astoria.” The latter became the best selling recording by a female artist in RCA's history. In 1957 she drew record crowds to the Empire Room of the Waldorf-Astoria, and in 1958 and 1959 she starred in a Broadway musical, “Jamaica.”

In the 1960s, Horne was involved in the American civil rights movement, participating in the March on Washington in 1963, performing at rallies in the South and elsewhere, and working on behalf of the National Council for Negro Women She continued to record for RCA, charting with “Lena on the Blue Side” (1962) and “Lena...Lovely and Alive.” (1963). Her records in the mid ‘60’s included, “Lena Sings Your Requests,” “Goes Latin,” “Feelin' Good,” “Lena in Hollywood,” and “Lena Soul.” During the same period she appeared on various television programs, including several performances on the popular Ed Sullivan and Perry Como variety shows, and her own special, “Lena in Concert, in 1969.”

The 1970s began tragically for Horne: her son, Teddy, died of kidney disease in 1970, her father died in the same year, and Lennie Hayton died of a heart attack in 1971. She contemplated retirement. However, the decade offered a variety of opportunities for Horne to perform. She appeared on Broadway with Tony Bennett in 1974 in a show called Tony and Lena and was featured in several television commercials. In 1978, she played the role of Glinda, the Good Witch, in the film version of ‘The Wiz.’

At age sixty three, she mounted a one-woman show that she brought to Broadway. ‘Lena Horne: The Lady and Her Music’ opened at the Nederlander Theatre on May 12, 1981, and was an instant hit. Within a month, she was given a special Tony Award marking its success, and the show played 333 performances, the longest run for a one-person production in Broadway history. The double album released by Qwest Records made the pop and R&B charts, and it finally won her a Grammy Award for Best Pop Vocal Performance; it also took the Grammy for Best Cast Show Album. After the show closed on June 30, 1982, Horne's 65th birthday, she took it on tour around the country and to London through 1984. At the end of the year, she was a recipient of the Kennedy Center Honors for lifetime achievement in the arts.

In the fall of 1988, she released, “The Men in My Life,” which made number five in the jazz charts. She was given the Grammy Lifetime Achievement Award in 1989. In 1994, she did a record for Blue Note under the title “We'll Be Together Again,” and appeared on Frank Sinatra's “Duets II” album, the same year. She performed at Carnegie Hall in September 1994 and the same month recorded a new live album, “An Evening with Lena Horne,” issued by Blue Note in 1995. It reached the Top 20 of the jazz charts and won her the Grammy Award for Best Jazz Vocal Performance. In June 1997, her 80th birthday was celebrated by a show at the JVC Jazz Festival and the presentation to her of the Ella Award for Lifetime Achievement in Vocal Artistry. A year later, she released a new Blue Note album, “Being Myself,”(1998) which made the Top Ten of the jazz charts. She came out of retirement to record three songs on “Classic Ellington,” for Blue Note in September 2000.

Her pride in her heritage and her refusal to compromise herself, combined with an innate ability to project elegance, grace, and dignity, have made her a legendary figure. Some observers consider her most important role to be that of a catalyst in the elevation of the status of African Americans in the performing arts. But Horne laments the sluggishness of progress in Hollywood; if given the chance to do it all again, she answered, “I'd be a schoolteacher.” Show less

Mid-Atlantic Jazz Festival Presents Stephanie Jordan In A Tribute To...


Seasons of a Life


The Lady Is A Tramp


An Evening With Lena... 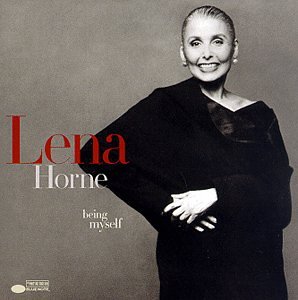 All About Jazz musician pages are maintained by musicians, publicists and trusted members like you. Interested? Tell us why you would like to improve the Lena Horne musician page.