Leonard E. Jones, born 1943 in Chicago, Illinois grew up in a rich musical environment on the near westside of the city that has had a everlasting impression on his life. His family lived above Vi´s Lounge where many blues artist such as Muddy Waters, Howlin´Wolf and Willie Dixon, Bo Diddley, etc., regularly appeared in the 1950´s. The famous *Zanzibar Lounge was located in the neighborhood just two blocks away. At seventeen Jones volunteered for the U.S. Army and after being stationed in Bad Kreuznach, Germany, he purchased his first double bass and received rudimentary instruction from a bassist in the army band that was also on the same barracks.

After being discharged from the military in 1963, Jones returned to Chicago. He began studying the bass privately with Mr. Rudolph Fahsbender, bassist with the Chicago Symphony Orchestra. In 1964, through an introduction from the bassist Charles Clark, he met Muhal Richard Abrams. Mr. Abrams was the leader of the Experimental Band, a forum for musicians looking for an environment conducive to their own creative inclinations. He was invited to participate in the groups rehearsals and began, as well, theoretical studies with Mr. Abrams. The Experimental Band rehearsals were a vital learning experience for a young novice.

In May 1965, the Association for the Advancement of Creative Musicians (AACM) was founded and Jones became a member in June. During that same year he began an association with the bassist Wilbur Ware, which was rewarding musically, but more so on a human level. Mr. Ware was an exceptional person. Jones attended the Chicago Conservatory of Music for one year, still under the tutoring of Mr. Fahsbender. He also participated in David Beth´s bass school, bassist with the Grant Park Symphony Orchestra. His activities until leaving Chicago centered around AACM functions and playing in more standard situations.

In June, 1969 Jones expatriated to Europe for five years, marrying, taking time out from music to study photography from 1970 to1972, at the Hochschule für bildende Kunst (art academy) in Hamburg, Germany. He performed with Henry Threadgill and Wadada Leo Smith in 1971. Jones spent six months traveling through southern Europe and Morocco in 1972 before returning to Munich to join with Smith, performing as a duo in 1973 - 74. In July 1974 he returned with his family to Chicago.

As a member of the Muhal Richard Abrams group Jones moved to New York in August 1977 and remained there until returning to Europe in 1980. He lived in Munich, working with Lezek Zadlo, Frank St. Peter and the band New Trace. In the 1980´s and 1990´s he toured and performed festivals in Europe and Africa with Lou Blackburn´s International Quartet and Mombasa, Alvin Queen Sextet, the Sun Ra Arkestra, with the Jack Walrath and Mike Clark Group, Hank Crawford and David Newman Group, Dave Burrell, Mal Waldron and Sonny Simmons. Jones also worked in a cooperative trio with Moo Lohkenn and Lou Grassi.

Besides experimental music and improvisation which had always been a part of Jones´ musical background, he has explored other musical areas, performing in Rhythm and Blues and Gospel formations with Gene “Mighty Flea” Conners and John C. Marshall, as well as, with the Orchestra of the Theater Oberhausen, Germany in a production of the Three Penny Opera for two seasons. In 1998 Jones played for five months in Dubai (UAE) in the Quartet of Johnny Scott (Canadian saxophonist). Thereafter followed performances and CD productions with the clarinettist Lajos Dudas . In May 2003 Jones worked in a project with George Lewis in Munich. From 2006 - 2008 Jones toured in a road show with a homage to Ella Fitzgerald and Billie Holiday; the show won a first prize. As a member of the Muhal Richard Abrams Experimental Band since 1964 he has also participated on festivals with the in band in Verona , Italy 1993, Chicago 1995, New York 1999, Saalfelden, Austria 2012 and Chicago 2015.

Leonard has had photographs published in - Jazztimes, Intercourse and Chamber Music America magazines. Video representation - Danilo Parra´s Closeness: the Untold Story of Kalaparuscha, Vimeo 2011 Photographs exhibited in The Freedom Principle: Experiments in Art and Music 1965 to Now at The Museum of Comtempary Art Chicago and The Institude of Contemporary Art at the University of Pennsylvania (ICA) shows. Photos published in books: George E. Lewis´- A Power Stronger Than Itself Paul Steinbeck´s - Message to Our People - Art Ensemble of Chicago Show less 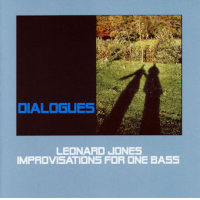 All About Jazz musician pages are maintained by musicians, publicists and trusted members like you. Interested? Tell us why you would like to improve the Leonard E. Jones musician page.