Having performed for audiences worldwide, Leon Foster Thomas is a unique force in modern jazz. The New York Amsterdam News has described his playing as “riveting, his artistry as unrivaled and his stage personality as dominant.” His virtuosic playing of the Steel Pan has enabled him to connect emotionally with the listener on every level. This World Steelband Music Festival Soloist and Duet Champion of 2002 and 2004, has worked with artists such as: Melton Mustafa, Nathan Davis, James Moody, Richard Smallwood, Hugh Masekela, Kevin Mahogany, David Dave Siegel, Nicole Henry, Abraham Laboriel, Sammy Figueroa, Len Boogsie Sharpe, Ken Professor Philmore, Ray Holman, Dolly Parton, Cyril Neville, Slinger Francisco Mighty Sparrow, 3 Canal, Etienne Charles, Winston Bailey Mighty Shadow, David Rudder, Pelham Goddard, Richard Bailey and James Polk to name a few. A native of the island of Trinidad, Foster, as he is also called, was born in the southern city of San Fernando on August 25th, 1981. He credits his parents, Hillouise Louise and Loderick Rollo Foster (both deceased), for his musical voice and the pan yards of Trinidad & Tobago for his initial musical training. Leon later attended Florida Memorial University where he graduated with a Bachelor’s degree in Jazz Studies. He is a prominent figure in the Miami music scene, performing and recording with Jazz, Latin, Rock, Gospel and Hip Hop artists

. In 2010, Leon released his first solo album titled What You Don’t Know, which perfectly illustrates his versatility and prowess of the various music genres. Apart from his playing, Leon is also recognized as a composer, arranger, and drummer. In 2003, he composed the piece, Call of the Amerindians: Rule of the Cacique, for Steel Pan soloist Shiron Cooper (now deceased), which won her the top prize at the 26th Biennial Music Festival held in Trinidad and Tobago. As the arranger for Miami Pan Symphony Steel Orchestra, he has won the Bomb Competitions of both the 2005 and 2006 Miami Carnival, as well as Miami’s 2009 Panorama Competition. In 2005 and 2007, Leon was the drummer for both winning bands of Trinidad and Tobago's National Panorama: Phase II Pan Groove and Courts Sound Specialists of Laventille, respectively. Leon continues to perform at various festivals and concerts as well as conducting clinics at various educational institutions on Jazz, Caribbean music and the Steel Pan art form. Show less

Read more articles
”Through his playing, he was transformed into one of the mythical char- acters— the spirit of the pans. It’s as if when he plays, he becomes one with the steel pans before the audience’s eyes. His artistry is unrivaled. His playing style riveting. And his stage personality domi- nant. He is absolutely charm- ing and works intensely hard at his craft, both as a musician and composer, yet makes it look so effortless.” - New York Amsterdam News 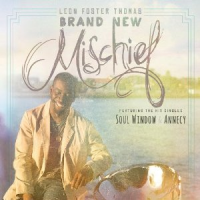 All About Jazz musician pages are maintained by musicians, publicists and trusted members like you. Interested? Tell us why you would like to improve the Leon Foster Thomas musician page.