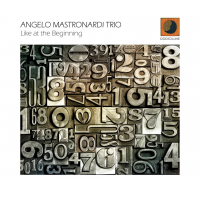 Angelo Mastronardi's first album as leader in piano trio, received by the critics for its originality and versatility, earning the label Jazzit Likes! By JAZZIT magazine as one of the best albums of 2014. "Its volatile energy is directed laterally fa more than cyclically. It, too could easily be identified as something coming from NYC as Italy...this is music that sticks to sunny tone and chipper disposition" David Sumner - Bird is The Worm "Mastronardi is not simply virtuosic, because in his fingers both academic studies and a visceral passion for improvisation resound, with a gentle and careful use of the left hand and crystalline notes that flow from the right" Alceste Ayroldi - MUSIC JAZZ magazine "A polychrome work, dedicated to researched linguistic and structural inventions" Antonio Di Vita - JAZZIT magazine "Under the banner of melody this discographic debut of the pianist and composer Angelo Mastronardi flanked by the double bass player Michele Maggi and the drummer Walter Forestiere. The three present nine songs of which six originals to which three standards are added (... these three reinterpretations that the trio shows an absolute originality to highlight a full expressive and executive maturity (.....) the other pieces, mainly the result of Mastronardi alone, are appreciated both for that melodic research which was mentioned at the beginning and for the sense of the structure that is always well present (....) and above all a Mastronardi pianist of excellent stature (...) within an often improvised phrasing it is possible to identify echoes of "other" music to demonstrate the deep knowledge of matter from an artist who is easy to predict a bright future " Gerlando Gatto - A Proposito di Jazz