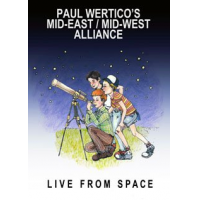 Comprised of the union between the Israeli duo, Marbin, and Chicago's Paul Wertico Trio, Paul Wertico's Mid-East/Mid-West Alliance represents a fresh direction in jazz and improvised music. After playing together for the first time when they met in the studio for their entirely improvised debut album, Impressions of a City, Paul Wertico's Mid-East/Mid-West Alliance now meets for the second time on November 21, 2009 to play their record release show at SPACE in Evanston, IL. In the spirit of the record, they open the show with a 43 minute-long improvisation that traverses sonic landscapes reminiscent of the album, as well as spontaneously created sounds never before heard by the band or audience. The band then dives into a series of original compositions from the Paul Wertico Trio's songbook, which become equally explorative as the band adapts live on stage (without ever having a single rehearsal!) to their new sound and personnel lineup. With multiple cameras and a fully mixed and mastered multitrack audio recording of the show, this DVD captures a historic evening that quickly solidifies into the definitive Mid-East/Mid-West Alliance live experience.

All About Jazz musician pages are maintained by musicians, publicists and trusted members like you. Interested? Tell us why you would like to improve the LIVE FROM SPACE [DVD] musician page.