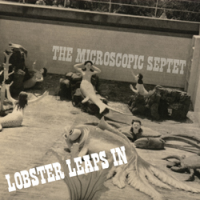 "...the saxophone-heavy Microscopic Septet drew on a cache of sophisticated improvisers and two of the era's most sophicated and stylistically slippery jazz composers and players – the pianist Joel Forrester and the saxophonist Phillip Johnston. This reunion promises equal parts zaniness and braininess..." – The New Yorker "...the Microscopic Septet served notice that they remain one of New York's most distinctive and entertaining groups." – All About Jazz New York "They took 20 years off, but it seems like they never went away.... Lots of comedy, which is sorely missing from most jazz, and whacked-out solos and ensemble playing. Why wasn't this disc more celebrated?" – Denver Post "...a wildly idiosyncratic, devastatingly accomplished ensemble." – Wall Street Journal "The Microscopic Septet...served up serpentine bop melodies, suave four-saxophone arrangements, and Dixieland-style collective raves–sometimes in the space of a single chart." – Time Out New York

All About Jazz musician pages are maintained by musicians, publicists and trusted members like you. Interested? Tell us why you would like to improve the Lobster Leaps In musician page.