Lonnie Gasperini a soulful jazz organist from the state of Rhode Island has recently moved to New York City where he continues to take his passion for organ jazz to another level.

Lonnie Gasperini was born into a musical family and started out on the accordion at age 6 greatly influenced by his uncle Tulio Gasperini who was a master of the accordion and well known internationally. On the other side of the family his mother's brother Bob Pellicio played drums and formed the Bob Pell Trio in which Lonnie's aunt was the vocalist. It was his trip to California at age 13 that found him sitting in a club drinking Shirley Temples while listening to tunes like Girl from Ipanema and Satin Doll that sparked his interest in jazz. In the mid sixties while still playing accordion he also took up drums while dabbling on a Farfisa organ, Fender Rhodes and piano in which he used these skills to later record an Album entitled “Joint Effort “ with the group “Cannabis” which toured in the late 60's throughout Texas..This album was reissued on CD by Gearfab record's in the US and also distributed by Comet record's in Europe and among other European record labels. featured on this album was Lonnie's tune “Only Rock in Stock”. In the early 70's Lonnie started playing more Gospel, Blues, R&B and Jazz with various bands and the Hammond B3 organ was his main instrument. He formed his own band The What's Up band which consisted of tenor sax, B3 organ and drums. Later on he hired baritone sax man Art Hazard and added a vocalist Lavern Sims. This band continued to play for 15 years until Lonnie reinvented his band, The Lonnie Gasperini Organ Trio which was made up of a guitarist, organ and drums. This Trio still plays today throughout New England and NYC and occasionally tours in Florida, California and Chicago which feature's different guitar players and drummers,

* “North Beach Blues” was recorded live in San Francisco at the famed “Purple Onion” and released by Doodlin Record's by Pete Fallico,

* Thurman Barker “Rediscovered”. Thurman is a professor of Jazz at Bard College who played and recorded with Cecil Taylor, Sam Rivers to name just a few. Lonnie was chosen for this project which includes sax man Sam Morrison former Miles Davis sideman. This CD shows a different side of Lonnie..progressive jazz in a hip organ trio.

Lonnie is currently working on a New Project which caters to Organic Funk!

Lonnie hosts Organ Jazz workshops throughout the New England and NYC area. Children participants have ranged in age form 5 to 18 providing a stage for children to work side by side with professional musicians during live performances in an instructional setting. 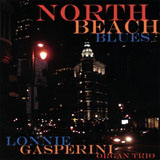 Turn up the Gas

All About Jazz musician pages are maintained by musicians, publicists and trusted members like you. Interested? Tell us why you would like to improve the Lonnie Gasperini musician page.