Since emerging in 2005, Scottish vocalist Louise Dodds has become a regular fixture on the British jazz scene. Her career has also taken her throughout the Middle East and Europe.

“Fly” is Louise's latest release. This new album contains a mixture of original compositions alongside fresh arrangements of classic jazz standards, and highlights her skills as a vocalist, composer, lyricist, improviser and arranger.

Louise enlisted the musical talents of some of the country’s most talented and renowned jazz musicians for her first recording project in 7 years – John Pearce on piano, Dave Green on double bass, Steve Brown on drums and Martin Shaw on trumpet and flugelhorn. Together they have numerous jazz awards under their belts, and have performed with the likes of Anita O’day, Peggy Lee, Mark Murphy, Cleo Laine, Art Farmer, Humphrey Lyttleton, Coleman Hawkins and Benny Golson – just a small glimpse at their incredible careers. The album also features a new arrangement of All or Nothing at All by Scottish pianist David Patrick.

Boasting an impressive jazz repertoire of over 300 songs, including bebop and vocalese numbers alongside songs from the Great American Songbook, she has been described by her peers as “innately musical”. She also writes and performs her own compositions.

Her debut eponymous album was featured on several BBC Radio shows (including a live interview broadcast from her headline gig at Pizza on the Park, Knightsbridge, London)

. 2011 brings her much-anticipated second album Airs and Grace Notes. This new recording showcases Louise’s skills as a vocalist and lyricist, as the album is a collection of previously released jazz instrumentals which she has penned lyrics to. It will be available at www.jazzcds.co.uk from 1st July 2011 Show less

A flair for ambitious takes on jazz tunes

Sings all the old standards with passion and feeling 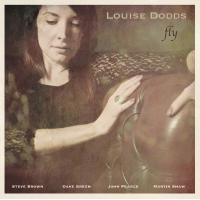 All About Jazz musician pages are maintained by musicians, publicists and trusted members like you. Interested? Tell us why you would like to improve the Louise Dodds musician page.