Currently based in Los Angeles (originally from Lecce, Italy), upright/electric bassist Luca Alemanno is considered by critics “among the finest young modern jazz musicians that currently Italy has to offer.”

In 2017, Luca won first place in the jazz division of the International Society of Bassists Performance Competition held in Ithaca, New York. Additionally, he won first prize at the 2009 European Bass Day. He is currently part of several other projects with artists including Cyrille Aimée, Simon Moullier, Anne Ducros, Stanley Jordan and Nicola Conte.

In addition to his appearances as a sideman, Luca is also active as a bandleader, with his debut album I Can See Home From Here coming in 2019. Show less

Read more articles
“His technical control, accuracy and facility on the bass are terrific. With his music he creates new directions where the tradition is a springboard.” Herbie Hancock

“Luca’s music is Art on the highest level. It’s poetic and has vision into the future.” Jerry Bergonzi 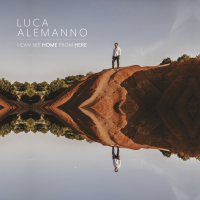 I can See Home From Here

Luca Alemanno
I can See Home From Here

All About Jazz musician pages are maintained by musicians, publicists and trusted members like you. Interested? Tell us why you would like to improve the Luca Alemanno musician page.