Lumbinigroove is a mix of Afro, Nepali and Jazz project started by Pravin Chhetri.There are so many similarities between the genres and its amazing how Nepali language fits into African rhythms and jazz harmonies.All instruments played by Pravin.

Pravin Chhetri, longtime member of Cadenza started as a bass player. Later he started playing the guitar and also moved on to trumpet, sax and different percussive instruments. The self taught musician is presently in Hamburg.

The name Pravin Chettri might not ring a bell till you learn of his longtime association with what started off as a three piece band, Cadenza, that is now a respected and admired Jazz collective. Pravin has finally released his solo album, Jau Sathi under the moniker Lumbingroove. With styles ranging from Funk, African rhythms and Jazz harmonies the result, if not treated carefully, could sound scattered. Add to that, taking on the challenge to not only play all the instruments on this album himself, he has also composed, recorded and mixed the album

The name Pravin Chettri might not ring a bell till you learn of his longtime association with what started off as a three piece band, Cadenza, that is now a respected and admired Jazz collective. Pravin has finally released his solo album, Jau Sathi under the moniker Lumbingroove. With styles ranging from Funk, African rhythms and Jazz harmonies the result, if not treated carefully, could sound scattered. Add to that, taking on the challenge to not only play all the instruments on this album himself, he has also composed, recorded and mixed the album. It could have gone awfully wrong except it doesn’t.

A total of 10 songs, with an Intro and Outro, you are immediately drawn to the album with the first full track, a breezy Pari Gau followed by the title track Jau Sathi kicking up a storm. Ramro Ho Ki is an easy favorite. It raises questions of an adolescent mind racked by confusion between right and wrong. After a laid back track the album picks up pace with an aptly titled feel-good song, Joom.

While listening to it one can literally imagine dusk settling on an evening beach party while a silhouette of people groove to the music. Track six, Jaga Jaga mellows it down to a funky sway with the sound of the alarm at the beginning of the song indicating a wake up call. There is reference to the selfish nature of humans with lines like Kutha na taana, Afna matra na sochera and Jaaga unnati piche aba laaga. Then comes another instant favorite – Maanisa. Lyrically this track follows in the heels of Jaga Jaga. There’s only one line in the entire track but it pretty much says it all – Maanisa le Manisa ko chusi sakyo blood. Nefro takes it down a notch with the emerging vocals providing a haunting yet soothing effect. While some musicians tend to take themselves too seriously, which reflects in their work, Pravin presents his music in a casual way and the colloquailism in his lyrics is actually appealing. He gets away with lines like Maanisa le maanisa ko chusi sakyo blood in Maanisa as he does in the eighth offering Mangalay. The album switches gear from track seven to light, humorous lyrical content. Track nine is Come Dance, a booty shaking number calling on everybody from all parts of the world (this could be taken as a message to the Nepali diaspora, of which he is one himself) to come together. Jau Sathi winds down with yet another soothing track titled Esmile. The tempo picks up, although short-lived, in the Outro.

Jau Sathi’s musical style might not be palatable to all but it will appeal to a wide audience because the music is matched with his simple, colloquial Nepali lyrics thus creating what is easily turning out to be Pravin’s signature sound. He has the ability to completely localise his music despite the various musical influences and that is what will make this album work. What’s also worth mentioning is the order of the tracks – you don’t realise when one track finishes and the other begins. The music on the album spans various continents and is yet largely a Nepali album. 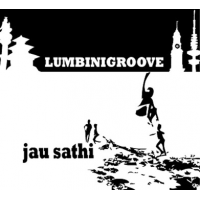 All About Jazz musician pages are maintained by musicians, publicists and trusted members like you. Interested? Tell us why you would like to improve the Lumbinigroove musician page.