When it comes to the handle of composer and pianist Cynthia Hilts’s intriguing octet, Lyric Fury, as the name suggests, the music is defined by powerful contrasts. Hilts likes to build from long, meditative passages to explosive endings. The tried and true technique of tension (and more tension) and release seldom yields more satisfaction or surprise. But as witness the brisk, striking originals on Lyric Fury, Hilts’s captivating new album, her orchestrations can go in different directions (and different keys) in the same moment, within the same beat or phrase. Imagine, if you will, a peaceful waltz through the meadow and a frantic run through a thunderstorm happening at the same time. Her music can fill the senses even as it swings like crazy. Together for several years, Lyric Fury boasts a lineup of top-drawer players with highly distinctive “A” games of their own. They include trumpet great and onetime Mingusite Jack Walrath, saxophonists Lisa Parrott and Lily White (who co-produced the album with Hilts), trombonist Deborah Weisz, cellist Marika Hughes, bassist Ratzo Harris, and drummer Scott Neumann. “When I first put the band together, I didn’t know most of the musicians,” confesses Hilts. “But I got really good at cold calling—hey, how would you like to work in a band that sounds like a celestial collision of Mingus and Debussy?” Over time, the members of Lyric Fury not only bought into Hilts’s demanding avant-meets-mainstream strategies, they found ways to enhance them

. “My pieces are difficult, even the stuff I think is easy,” said Hilts, “and I can get a little tyrannical in getting people to do what I want.” But in the best sense, these musicians gave as good as they got. As reflected by the infectious opening track of Lyric Fury, “Those Basinites,” the Tucson native can write from the ground up. Inspired not by Count Basie but the quirky residents of Basin, Montana, where Hilts did several residencies, the tune started with what she called a “nice noodley line” in a slow 5/4 with swinging sixteenth notes. It took on a funky quality through the addition of a bass line that, she wrote in a lively but short-lived blog, “turned out to be so chunkily engaging that it was almost a forest unto itself” and ended up being re-fashioned into a more approachable, medium-tempo piece in which “the beat is about a heartbeat long rather than a long, slow breath.” But much of Hilts’s music, for which she writes her own poetic lyrics, responds to situations and events. “Previously a Thing,” a brash invocation that turns Horace Silver-style hard bop on its ear (dig White’s passionate tenor solo), was written after a breakup. The free-gliding “Blues for the Bronchs,” featuring out-of-sorts voicings and a ripping, hard-edged solo by Walrath, was inspired by an unshakable case of bronchitis. A seasoned peace activist, Hilts composed the album’s most lyrical and deeply affecting work, “Peace Now,” following the outbreak of the Iraq War. Her vocal—part scat, part chant, part heartfelt plea—is framed by the dark tones of Parrott’s baritone and Hughes’s cello and carried by bright rhythms. “Teacher,” with its delicate piano introduction and South African lilt, is a prayer for a spiritual leader. “I wrote ‘Teacher’ really quickly, it just poured out,” Hilts says. “It was so organically correct, I couldn’t tell in the beginning if it was a tune or not. The South African feel, which was inspired by Abdullah Ibrahim, came later. This turned out to be the ‘pop hit’ of Lyric Fury.” Show less 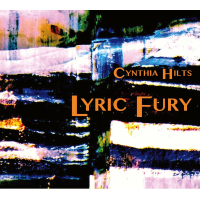 All About Jazz musician pages are maintained by musicians, publicists and trusted members like you. Interested? Tell us why you would like to improve the Lyric Fury musician page.