Mahalia Jackson rose from Deep South poverty to world renown as a passionate gospel singer. Closely associated with the black civil rights movement, Miss Jackson was chosen to sing at the Rev. Dr. Martin Luther King Jr.'s March on Washington rally at the Lincoln Memorial in 1963. “I been 'buked and I been scorned/ I'm gonna tell my Lord/ When I get home/ Just how long you've been treating me wrong,” she sang in a full, rich contralto to the throng of 200,000 people as a preface to Dr. King's “I've got a dream” speech. That was truly a historic occasion.

The song, which Dr. King had requested, came as much from Miss Jackson's heart as from her vocal cords. The granddaughter of a slave, she had struggled for years for fulfillment and for unprejudiced recognition of her talent. Although Miss Jackson's medium was the sacred song drawn from the Bible or inspired by it, the words-and the “soul” style in which they were delivered-became metaphors of black protest. Among her own people her favorites were “Move On Up a Little Higher,” “Just Over the Hill” and “How I Got Over.”

Singing these and other songs to black audiences, Miss Jackson was a woman on fire, whose combs flew out of her hair as she performed. She moved her listeners to dancing, to shouting, to ecstasy.

Many of Miss Jackson's songs were evocations of religious faith and were intended, in keeping with her own profound belief in God, to be devotional. Her rhythms might be syncopated, but her soaring voice aimed to obey the psalmist's injunction to “make a joyful noise unto the Lord.”

Miss Jackson's songs were not hymns, nor were they jazz. Convinced that everything she said or did rested on the word of God, she resisted efforts of the late Louis Armstrong and other jazz or blues musicians to transform her into a jazz singer.

Seeking to communicate her faith, Miss Jackson did a great deal of her singing, especially in the early days, in store- front churches, revival tents and ballrooms. A massive, stately, even majestic, woman, she possessed an awesome presence that was apparent in whatever milieu she chose to perform.

Whether singing at the inauguration of President John F. Kennedy or at Constitution Hall in Washington, or at Philharmonic Hall here, or in prisons, hospitals and children's homes, Miss Jackson always commanded respect. But she never forgot her origins. Born in New Orleans on Oct. 26, 1911, she was the third of six children of a man who was a longshoreman by day, a barber by night and a clergyman on Sunday. Her home, left motherless when she was 6, was impoverished but respectable.

She was reared by Aunt Duke, a religious woman, who took her to a Baptist church on Sunday where the congregation sang hymns. Miss Jackson, who never learned to read music, joined in “because I was lonely.” She was also poor, and was obliged to leave school in the eighth grade to work as a cook and washerwoman.

In 1928, she departed New Orleans for Chicago to live with an uncle. There she worked as a hotel maid and as laundress and babysitter. She also joined the Greater Salem Baptist Church, where her voice soon stood out in the church chorus and she became a soloist.

In the early nineteen-thirties she took part in a cross- country gospel crusade and began to attract attention in the black community with such songs as “He's Got the Whole World in His Hands,” “I Can Put My Trust in Jesus” and “God Gonna Separate the Wheat From the Tares.” This was her first recording, in 1934.

At the outset, however, Miss Jackson experienced difficulty in getting her music accepted in the larger, more middle-class black churches because of the bounce and vigor with which she performed. But as her fame spread, these churches opened their doors to her, especially when she sang some of the more traditional songs, such as “Just as I Am” and “I Have a Friend.”

Meantime, Miss Jackson was becoming known in the white community through her records, which sold in the millions. Finally, on Oct. 4, 1950, she appeared before a packed house at Carnegie Hall, the first of a series of annual performances there. Following her New York debut Miss Jackson appeared on radio and television and began her tours abroad in 1952. She was particularly popular in France and Israel. Her celebrity was enhanced in this country with appearances at the Newport Jazz Festival. In one of these, in 1958, she was with Duke Ellington and his band in a gospel interlude of his “Black, Brown and Beige.”

Beginning in 1964 Miss Jackson was in and out of hospitals. Physicians warned her of exhaustion from her demanding itineraries. She was hospitalized in the fall of 1967 for heart trouble, and passed a few years later in 1972.

At the funeral, which was attended by over six thousand fans, singer Ella Fitzgerald described Jackson as “one of our greatest ambassadors of love ... this wonderful woman who only comes once in a lifetime.” 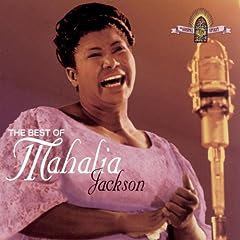 The Best of Mahalia...

All About Jazz musician pages are maintained by musicians, publicists and trusted members like you. Interested? Tell us why you would like to improve the Mahalia Jackson musician page.