Jazz bassist Major “Mule” Holley, a Detroit native, began playing the violin at age 7 and learned the tuba and every other wind-related instrument in the bass family as well as piano during a 1940s stint in the Navy. His first professional gig was in San Diego in 1946 where he performed in an ensemble led by saxophonists Wardell Gray and Dexter Gordon. He moved to New York after getting out of the service.

Holley moved to England in the ‘50’s doing session work at the BBC. The same decade returning to the states he toured with Woody Herman in 1958 and with Al Cohn/Zoot Sims in 1959-60.

In the 1960’s he garnered a distinguished reputation as a top notch studio player and sideman, playing with Duke Ellington in 1964 and with the Kenny Burrell Trio, Coleman Hawkins, Lee Konitz, Roy Eldridge, Michel Legrand, Milt Buckner, Jay McShann and Quincy Jones.

He taught at Berklee College in Boston from 1967 to 1970 and toured Europe with the Kings of Jazz in the mid-70s.

Holley was noted for singing along with his bass solos, a technique fellow bassist Slam Stewart had originated. Holley and Stewart recorded together on two albums in the 1970s.

In the ‘80’s he did some fine recordings for the French Black and Blue label, which continue to be reissued. 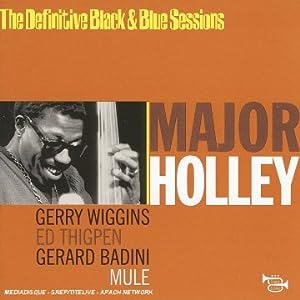 All About Jazz musician pages are maintained by musicians, publicists and trusted members like you. Interested? Tell us why you would like to improve the Major Holley musician page.