His most recent recording was the 1999 CD, “If You Could See Us Now!,” Nancy Marano & Manny Albam. He also arranged Joe Lovano’s critically-hailed 1997 CD, “Celebrating Sinatra,” and arranged and conducted Hank Jones and the Meridian String Quartet. Albam’s 1958 jazz version of “West Side Story” was nominated for a Grammy.

Albam’s compositional style, which combined sophisticated harmonies with a deep sense of fun, were as recognizable to his fans as the great dust-broom of a mustache he wore for much of his adult life. But his charts always provided a sturdy underpinning for the great soloists with whom he worked throughout his career and whom he held in great esteem. “He is a rare and precious talent,” said saxophonist Phil Woods, a frequent collaborator.

Born in the Dominican Republic on June 24, 1922, and raised in New York City, Albam started playing alto and baritone saxophone professionally while still at Stuyvesant High School. After a brief service in the Army during World War II, he toured with the big bands of Charlie Barnet, Jerry Wald and Sam Donahue as both a sax player and arranger. In 1950 he put down his horn and began working full-time as a freelance composer and arranger in New York.

In addition to dozens of jazz recordings, Albam also wrote music for television movies, (“Four Clowns,” “Around the World of Mike Todd,” “The Glory Trail”) and commercials for Coca Cola, Gillette and Chevrolet, among others. In later years he ventured into more ambitious orchestral compositions that combined jazz harmonies and soaring instrumental solos with contemporary classical compositional techniques. Several of these, including one performed by Bud Shank and the Royal Philharmonic Orchestra were released on CDs.

A dedicated teacher, Albam was a founder of BMI’s Jazz Composers Workshop and at the time of his death was still serving along with Jim McNeely as Co-Musical Director. He was also a professor of composition at the Manhattan School of Music. He was previously co-director of the Eastman School of Music’s prestigious summer arranger’s workshop.

Albam from the Archives 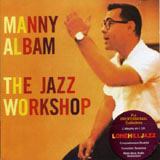 Jazz Greats Of Our...

All About Jazz musician pages are maintained by musicians, publicists and trusted members like you. Interested? Tell us why you would like to improve the Manny Albam musician page.