Born in Seville. Since the beginning of his adolescence he has felt a great interest in music and the guitar in particular, which makes him begin in the world of the six strings and start playing in rock groups. Recordings and live performances that led to the composition and recording of some headers for TV programs.

From the discovery of jazz, his interest and continuous training in the Conservatory of Seville and the Musicians Workshop of Madrid in temporary stays in the capital of Madrid. At the same time, he is part of popular music groups that travel around Andalusia.

After studying with the master Fran Mazuelos is when his vision of music, jazz, harmony and creativity takes another dimension and his musical and personal north turn 180 degrees.

After a fleeting trip to NYC is when he starts on a more personal project that includes his vision and original music.

Manolo Pereira Manolo Pereira Trio Equilibrio guitar trio Jazz guitarist contemporany jazz Spain guitar Seville
”In Manolo Pereira's way of composing and playing we see one of those musicians who, in spite of drinking from the history of Jazz, looks for his own sound, searching in the different resources of the guitar for the adequate expressiveness to each theme, achieving a heterogeneous but recognizable sound.” Jazz ese ruido by Félix Amador 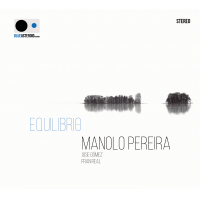 From: Equilibrio
By Manolo Pereira

All About Jazz musician pages are maintained by musicians, publicists and trusted members like you. Interested? Tell us why you would like to improve the Manolo Pereira musician page.