The most widely known musician from the African nation of Cameroon, Manu Dibango was one of the pioneers of world music in the early 1970s and remained one of the most internationally celebrated African musicians into the mid-1990s. Long recognized for combining African, American, European, and techno sounds, Dibango first achieved global fame in 1973 with “Soul Makossa,” through which he popularized makossa music, a Cameroonian form of early-century West African dance music.

Born Emmanuel Dibango on February 10, 1934, in Douala, Cameroon, Dibango first discovered his interest in music as a boy at home and in church. In addition to church music, which included many classical European scores, Dibango also listened without his parents' knowledge or approval to modern music on their gramophone. There and at performances in Douala, Dibango as an adolescent heard African musicians playing an assortment of modern Western music and Cameroonian styles, including initiation music, with drums and wooden instruments, and “assico,” percussive dance music played by guitar bands.

Hearing these bands, Dibango gained early exposure to “makossa,” a modern Cameroonian version of West African highlife music. Highlife developed in the 1920s and 1930s from African musicians who incorporated original dance tunes into their performances for colonial audiences. The form drew on Western music, including jazz. As a West African response to merchant trade under colonial rule during the first half of the twentieth century, highlife represented an early accomplishment for modern Africa.

After moving to France with his family at 15 to study for a diploma, Dibango heard American jazz and began to consider himself a musician for his love of the art form. In Paris during the 1940s, Dibango redirected his efforts from the piano toward the saxophone and absorbed, with a number of African musicians, the jazz, Latin American mambo and samba, Caribbean beguine, and Creole music permeating the city. At the end of the 1950s, Dibango moved to Brussels, Belgium.

Dibango played with leading African musicians living in Europe, including Joseph Kabasele, a star singer from the Congo whose album, “Independence Cha-Cha,” became a hit in both Africa and Brussels when the Congo gained its independence in 1960 and became Zaire. Dibango performed in Zaire with Kabasele in 1961 and with the band African Jazz until 1963, when Dibango returned to his native Cameroon after a 12-year absence. Dibango began composing in Zaire, made his first recording there as a pianist for African Jazz, and appeared on over 100 singles.

In 1965 soul music was flourishing in Paris, and Dibango returned there to begin an international ascent as a saxophonist. After three albums, including his 1968 debut, “Manu Dibango,” Dibango's fourth record caught on big in the U.S. and across Europe and Africa. Released on Atlantic Records in 1973, “Soul Makossa,” rode the phenomenal success of its title track to win a gold record for sales in the U.S. and a Grammy Award nomination for Dibango for best rhythm and blues instrumental performance of the year.

Since that success, Dibango has released numerous albums of African dance music combined with jazz and rhythm and blues. In 1979 he experimented also with reggae, recording with some of the Wailers in Jamaica. Then, in 1984, he celebrated 30 years in the music industry with an “electric-pop” album called “Abele Dance.” The title single quickly became one of the top African songs of the year. Still, Dibango received some criticism of his shows following Abele Dance. In response to such questions of his authenticity as an African musician, Dibango asserted the freedom of all musicians to “absorb and mix influences. “

With his 1991 album, “Live '91,” Dibango proved his continuing ability to build bridges between cultures and traditions. African stars Youssou N'Dour, King Sunny Ade, and Ladysmith Black Mambazo recorded with Dibango on his 1994 album, “Wakafrika,” released on the Giant label. In 1996, he brought out another album, “Lamastabastani.” The sudden death of his wife in 1995 inspired nostalgic music, his saxophone breathing life into gospel and bluesy ballads.

Released in April 2000, Manu's album “Mboa'su.” The album title (which means “At Home”) reflected Manu's state of mind. In his career, the sax star had come to feel at home in many different countries, but at this stage of his career he also felt the need to look back on his African roots.

In 2001 Manu released a new album entitled “Kamer feeling” featuring the piano players Omar Sosa and Mario Canonge. This new opus fused reggae and rap with powerful Cameroonian rhythms,while remaining in the tradition of Swing jazz. Manu blasted back into the French music news in May 2002 with a new compilation entitled “B Sides”. Reworking a selection of tracks originally recorded between 1971 and 1983, Dibango introduced various new instruments into his early work, experimenting with the marimba and the xylophone.

The year 2003 was a highlight in Manu Dibango's career, being both the year he turned 70 and the year he celebrated the 30th anniversary of “Soul Makossa.” Manu returned to his native city, Douala. His concert there was a major event, his last performance in his birthplace having been 27 years before.

In May 2004, he was named as Unesco's Peace Artist of the Year. Unesco's director general, Koichiro Matsuura, declared that the honour was “in recognition of the exceptional contribution he has made to the development of the arts, to peace and to dialogue between the world's different cultures.”

Manu in 2005 put together a new group, the Maraboutik Big Band, and performed in Paris. Drawing on his own repertoire throughout the shows, he also covered a series of jazz classics, reworking them in his own inimitable funk and makossa style.

In September 2006, Manu was back in the music news with “Manu Dibango et le Soul Makossa Gang”, a DVD which captured his vibrant on-stage performance at the “Uriage en Voix” festival in 2005.

In his teenage years, black American jazz icons such as Louis Armstrong and Sydney Bechet had been a powerful motivating force in Manu's life. And in March 2007, the Cameroonian musician paid his own tribute to Bechet, the renowned composer and musician from New Orleans, with a pure jazz opus entitled “Manu Dibango joue Sydney Bechet.”

He still performs, albeit less frequently these days. But now in his 70s, he’s earned the right to slow down. One thing that hasn’t diminished, however, is his influence. Manu Dibango remains the African Colossus. 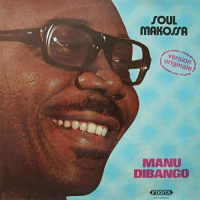 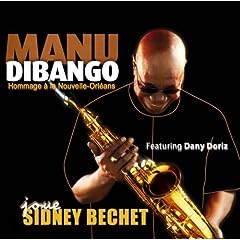 All About Jazz musician pages are maintained by musicians, publicists and trusted members like you. Interested? Tell us why you would like to improve the Manu Dibango musician page.