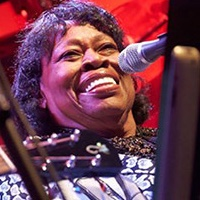 As the only African American President of the civics-oriented 5-4 Optimist Club of Los Angeles, she taught music history, respect for law, educational achievement, endless perseverance and integrity to both local schoolchildren and citizens. These are the tools of community building that launched the conception of L. A. Music Week. Well established as a multi- talented lyricist, classy multi-genre entertainer, blues historian, community leader and motivational speaker, Margie represents the Blues Genre with sincere poise, dignity and trademark robustly effervescent, jovial sophistication, unlike the typical blues stereotypes. She shares, “I've been around a long time and I've really paid my dues.”

Marjorie Ann Johnson was born in Shreveport, Louisiana, United States.[1] Raised as a devout church member, Margie's earliest exposure to music was through gospel music and learning how to play the piano under her mother's tutelage.[5] A woman full of love, innovative ideas and a deep understanding of her culture, Margie's love for music is overwhelming! She received the opportunity to demonstrate the music within her after she moved to Los Angeles in 1958 to stay, which allowed her some fortuitous breaks in the entertainment business. Primarily, she initially sang as a backup vocalist with Billy Ward between 1958 and 1964, prior to joining and performing with the Ron Marshall Orchestra at the Tikis in Monterey Park, California between 1964 and 1969. In 1969, Margie was introduced to the famous Johnny Otis by Hector Revere, then afterwards, she successfully auditioned to join his band. [1] During her four-year stay there, touring Far East Asia with the Johnny Otis Show, she thrilled audiences as she performed on both “The Johnny Otis Show Live at Monterey “ and the “Cuttin' Up” albums.

In addition to her many songwriting, producing, recording, acting and performing duties, Evans used her influence to help set up the Southern California Blues Society in order to unify Blues musicians and help promote the rich art form through education, community building and sponsorship.[5]

Afterwards, Margie began her solo career in 1973, and found almost immediate chart success. Her rare track “Good Feeling” (United Artists 246) entered the R&B chart on June 30, 1973 for four weeks, reaching number 55. However, it was another four years before her stellar “Good Thing Queen - Part 1” (ICA 002) entered the same chart listing on July 9, 1977 for eight weeks, peaking at number 47.[1] Then in 1975, she supplied background vocals on Donald Byrd's album, “Stepping into Tomorrow.”[6]

Additionally, in between these hits, in November 1975, Margie appeared on German television filmed at the Berlin-based Jazz Tage concert with Johnny “Guitar” Watson, Bo Diddley and James Booker.[7] Also, with Bobby Bland as her record producer and part-time song writing partner, Evans co-wrote the song “Soon As the Weather Breaks”, which reached number 76 (R&B) for Bland in 1980.[1][8]

Later in 1980, Margie wowed audiences as she performed at both the San Francisco Blues Festival and the Long Beach Blues Festival, repeating the feat at the latter a year later. During her international touring, she took part in the American Folk Blues Festivals, hosted by her dear friend, Horst Lippman in 1981, 1982 and 1985.[9]

With an extensive discography, Evans has also served as both producer and co-producer of many records, including six records for Bobby “Blue” Bland for Monk Higgins Productions. She is quite the activist, lecturer and historian, even taking a stand with NARAS to protect the Traditional Blues genre. Therefore, Margie was graciously celebrated with the Keeping the Blues Alive Award In 1983 by The Blues Foundation at the famed Peabody Hotel.[3] The multi- talented artist has performed with many great entertainers: B.B. King, Joe Turner, Eddie “Cleanhead” Vinson, Albert King, Pee Wee Crayton and Willie Dixon, among countless other famous performers.

Never complacent with just one facet of her soaring career, Margie Evans' burden for musical education in Los Angeles, California fueled her founding and establishment of Los Angeles Music Week. Driven by the severe lack of parity in music education and the outcry of Los Angeles artists who work abroad, yet seldom receive proper artistic recognition in their city of residence during their lifetime, Margie resolved to actively resolve these inequities firsthand, with the assistance of her daughter, LAMW President Vicki Evans, in 1994.

Thus, “Los Angeles Music Week,” an annual celebration spanning almost two decades, was designed to serve as “An Instrument of Unity,” bringing together all of the diverse populations in multiple events, to educate the citizenry and children while honoring musical pioneers as well as new artists, so that all citizens appreciated Los Angeles' uniquely diverse musical heritage. This celebration was amply supported annually by each of the city's and county's councilmembers, augmented by various partnerships, sponsors, volunteers and participants.

Fulfilling the motto, “An Instrument of Unity,” Los Angeles Music Week (LAMW) served all of the residents of the Greater Los Angeles area, including its surrounding basins. The performances, projects and events impacted people of diverse cultures, ages, ethnicities, religions, backgrounds and socio-economic groups. The wide scope of events offered Angelenos various opportunities to hear and enjoy previously unfamiliar musical genres and invited them to explore wonderful venues in many parts of the city. Additionally, LAMW's varied interactive educational activities were enabled in elementary, middle and high schools while the local tourism was greatly advanced due to LAMW's diverse performances and talent showcases, proudly celebrating Los Angeles' historic musical heritage. This unique celebration is described by one of the noble honorees, Supreme Master Ching Hai, suprememastertv.com/en1/v/31502633453. html.

As such, for 16 years, Los Angeles Music Week filled a desperately needed and widely appreciated niche in the community outreach which benefited Angelenos and tourists, while redeveloping the skills pool that is so vital for the maintenance of the vast entertainment industry. This garnered for Margie Evans the highest regard from all of the citizens and elected officials in both the City and the County of Los Angeles, in addition to those of other cities and cultures, who admired and supported Evans’ ebullient initiative, vast experience, legendary artistry, varied talents, profound insights and trademark leadership. As the inimitable Margie Evans always shared her famous trademark adage with her daughter, “Success is there for those who prepare.”

”Legendary Gospel-influenced Blues singer and recording artist Margie Evans is Los Angeles' official Ambassador for the Blues...an international Blues artist, Margie has spent her life trying to uplift the image of the Blues and improve the lives of those who play music for a living.” -”Ambassador for The Blues”. Pat Kramer. Southland Blues Magazine, October 2004.

“About two years ago, she and some of her blues buddies were sitting around the 5-4 Ballroom on Broadway lamenting the relentlessly downward spiral Los Angeles seemed to be caught in — the numbing round of riots, earthquakes, fires and a depressed economy

”Legendary Gospel-influenced Blues singer and recording artist Margie Evans is Los Angeles' official Ambassador for the Blues...an international Blues artist, Margie has spent her life trying to uplift the image of the Blues and improve the lives of those who play music for a living.” -”Ambassador for The Blues”. Pat Kramer. Southland Blues Magazine, October 2004.

“About two years ago, she and some of her blues buddies were sitting around the 5-4 Ballroom on Broadway lamenting the relentlessly downward spiral Los Angeles seemed to be caught in — the numbing round of riots, earthquakes, fires and a depressed economy. And even though some in the group had spent years at the top of show bills, few of them could even buy a local booking. To their minds, that was about as lowdown and dirty as a shame could get. A city fracturing along racial and ethnic lines, profoundly talented Los Angeles- based musicians being ignored by local clubs and promoters . . . something had to be done. Margie Evans decided to try to recapture an earlier era when the races mixed more easily at various venues, brought together, momentarily at least, by a shared passion for music. She decided to launch “Los Angeles Music Week,” a celebration of locally based musicians in performances ranging from soul to salsa, blues to bolero, bebop to hip-hop. “Music can bring every race together on the face of this Earth,” said Evans, who once sang with a Latino band in Monterey Park. ”All of the greatest messages of the world are spoken through music.” -Instrument for Unity: Singer's “L.A. Music Week” Seeks to Bridge Racial Gaps. By Edward J. Boyer, Times Staff Writer, 11 Dec 1995.

All About Jazz musician pages are maintained by musicians, publicists and trusted members like you. Interested? Tell us why you would like to improve the Margie Evans musician page.