Mariah Picot has spent her life in the arts. “Growing up in a musical family certainly helped”, she says. “We always had family jam sessions and my first public performance was at the age of 5.” She completed a Bachelor of Music, in voice at Queens University, Kingston, On. She then started a professional career in musical theatre, with lead roles in many musicals and cabarets In Toronto and across western Canada. During this time she was also doing extensive theater training with teachers from CAST [Centre for Actors Study in Toronto] in Toronto, and Herbert Bergoff Studio in NYC.” Mariah was a guest soloist with the London [ON] Symphony, and was asked to sing for the Canadian Command Performance at Massey Hall, along with other guests including Jim Carey, Rich Little & Buffy St. Marie. She was the only performer that evening to have 2 paragraphs written about her by the reviewer in the Toronto Star. “a dynamic singer” -Ray Conalogue. During the mid Eighties, she changed her focus to jazz piano studies with Frank Falco and began performing in piano bars. Her longest running job of 2.5 years at Tom Jones Steak House, right in the middle of the theater district. In Florida, Mariah was busy working in clubs and hotels as a solo artist. She was a member of “Steeplechase”, a jazz quartet with an emphasis on vocal harmony. She has been heading her own group, “The Mariah Picot Trio” and Quartet, on piano/vocals where she sings in English, French, Portuguese and Italian

vocal - Beginner to Advanced Based on the work of Cornelius Reid. See web site or call for more details. www.mariahpicot.com 817-488-3789 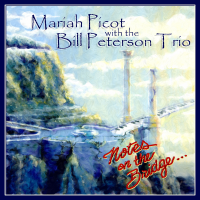 Notes on the Bridge...

All About Jazz musician pages are maintained by musicians, publicists and trusted members like you. Interested? Tell us why you would like to improve the Mariah Picot musician page.