Began his musical career from 4 years old, dabbling in Venezuelan popular music, she plays “Cuatro”, guitar and specializes in mandolin, was participant, performer and director of several typical Venezuelan music group. She has represented Venezuela as a mandolin player in national and international festivals, participated in numerous exhibitions of typical music of Venezuela and Portugal, a country with cultural affinity for her. During her education and even in college she created the Foundation “People Who Feels” entity that provide free music instruction to children and adolescents. Nowadays she is currently supporting ProMusik foundation for teaching homemade music production. She has shared stage with national artists like Guaco, Malanga, Johnny Sigal, Vinilo Versus, Aquiles Baez, and International figures like Maroon 5, and Duran Duran. In parallel Malí gets her degree in Industrial Engineering, and specialization in General Management which would serve her in 2011 to establish and inaugurate the country's largest concert Bar, “ The Theatre Bar Valencia” cultural epicenter with more than 500 spectators capacity, where there have been artists like Jarabe de palo, La Mala Rodríguez , El Cuarteto de Nos , La Vida Boheme, Amigos Invisibles, Don Tetto, and hundreds of national and international bands. Hers compositions have reached the top of the Venezuelan Record Report, breaking a mark of 12 weeks at no. 1 on Billboard Pop & Rock 2006 with the song “Me Desenfocas” then in 2009 rolls a second album titled “Un Tanto mas”. Where debut as a producer and becomes the first Venezuelan Hit Parade with” La Reina del Lugar” Likewise again reaches the big screen with “No Te Detengas” Song which is part of the Movie Soundtrack, “Faces of the Devil”. Currently she is working on the release of her first solo singer album “Blues, Live SexyOn” Vol. 1. A play with words referring songs recorded on session in rhythms of blues, swing and polka, songs that explain in an ironic and sarcastic way the current realities lived in Venezuela and the hole world, This EP is composed and produced by Marianne Mali with accent on the “i”.

“Love music and pleasure, in this strict order should be made ...” Marianne Malí 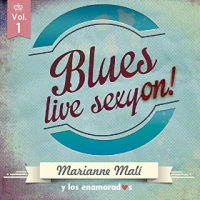 All About Jazz musician pages are maintained by musicians, publicists and trusted members like you. Interested? Tell us why you would like to improve the Marianne Mali musician page.