Writing in the liner notes, jazz critic John Murph calls Matheny-Katz “a captivating singer who…possesses a quintessential jazz voice, which she enlivens with lissome, conversational phrasing.” The vocalist has a penchant for dressing her tunes in new and noteworthy arrangements.

Murph, a contributor to JazzTimes, Down Beat and NPR Jazz, says, “Matheny-Katz conveys just the right amount of sanguine optimism, borne out of personal struggles and triumphs.” Born in Staten Island, Matheny-Katz spent her teens singing folk music in coffeehouses on Staten Island and Manhattan. Although she loved their music, the young singer was not yet ready to follow in the footsteps of Billie Holiday, Nina Simone, and Bessie Smith. While their jazzier sound appealed to her, she remained focused on folk music for some time.

She married young and left New York with her husband and two children, moving to Connecticut, Michigan, and Massachusetts. She gave up performing for a decade. After earning a degree in economics at the University of Massachusetts, she became an economic analyst, work that took her to the Mid-Atlantic region. (By day, she still works in engineering and public welfare economic analysis for large water resources and civil works projects.)

She moved to Baltimore in 1988, after her first marriage dissolved, and soon returned to her first passion—music. She sang blues with Annapolis-based group Park House Jam for 11 years. They recorded the well-received CD Fully Exposed, and played many clubs and festivals throughout the region.

In 2000 a colleague suggested she enter Baltimore’s annual Billie Holiday competition, and that was her first real move toward jazz. She took second place in the prestigious competition and repeated the feat in 2002. In 2009, the last year of the competition, she was invited to perform in a Billie Holiday tribute concert at Artscape 2010 at the Joseph Meyerhoff Symphony Hall.

How did she develop those pipes? In 2001, she made a pivotal connection with pianist and educator Vince Evans. Evans schooled her in jazz form, vocal performance, and theory and helped her put together her first “book,” to begin gigging. In 2003, she formed the M2K Jazz Ensemble, drawing from a pool of stunning musicians from the Baltimore-Washington area, such as pianist Lafayette Gilchrist, guitarist O’Donel Levy, bassist David Lowe, drummer Aaron Walker and saxophonist Craig Alston. Before long she was working with pianists such as Alan Blackman and Joel Holmes; bassists Herman Burney, Jeff Reed, Eric Wheeler and James king; drummers Jay Jefferson, Eric Kennedy, and Mark St. Pierre; guitarist Michael Raitzyk; horn players Tim Green and Todd Marcus; and multi-instrumentalist Warren Wolf.

Matheny-Katz also studied vocal jazz with Ronnie Wells and Ron Elliston, Sheila Jordan, and JD Walter. She has studied with Jay Clayton at Peabody since 2005 and considers Clayton to be one of her most valuable mentors.

She has performed in the Mid-Atlantic Jazz Festival, New Jersey Jazz Festival, Patterson Park Concert series (seven times), Artscape, the Eubie Blake Center, Germano’s, the Carlyle Club, Acton Jazz Café (near Boston), and often at the Tremont, Radisson, and Colonnade Hotels in Baltimore. Along with her jazz career, her romantic life flowered in 1996, when she met Howard Katz in the process of purchasing his house on Baltimore Street across from Patterson Park. She finally bought the house, and he remained on as a tenant. Before long, the two were dating. They were engaged in Venice in 1999 and married in July 2001. Howard Katz is a jazz lover with a sizable collection of jazz recordings. Their romantic partnership became a jazz partnership when they moved to a large home with room for a 60-seat concert area. In 2007 they began presenting top-notch local and touring talent including names such as Cyrus Chestnut, Nicholas Payton, Tim Warfield, Terell Stafford, Curtis Fuller, Larry Willis and JD Walter. Jazzway 6004 was named by Downbeat Magazine as one of the finest house concert venues in the country.

Guests were often greeted by the family’s lovable pit bull, Bessie, Matheny-Katz tells of the time when vocalist JD Walters was giving a vocal workshop at Jazzway 6004. Bessie and Walters had taken a huge liking to one another, and Bessie sat on the couch next to Walters whenever he was there. Once, after demonstrating some vocal techniques, Walters asked his students, “Now, who would like to come up first and try this out on a song?” At that invitation, Bessie bounced off the couch and came to stand next to JD – causing the class to erupt in laughter. Many Jazzway 6004 regulars were heartbroken when Bessie, age 13, died in 2013.

Jazzway 6004 continues to nurture Baltimore jazz. As a non-profit presenter, Jazzway teams up with jazz radio and co-produces events with entities such as the The Creative Alliance at the Patterson in Southeast. Matheny-Katz and her husband are also producing a documentary film on Baltimore jazz. Directed by Jonathan Bevers, “Tell Me More—and Then Some,” looks at the rich past and powerful present of Charm City jazz, featuring modern day artists such as Integriti Reeves, Warren Wolf, Kris Funn, John Lamkin III and Craig Alston. The film is due out in 2015.

Marianne Matheny-Katz will play numerous concerts in connection with her 2014 album. She’ll also continue to present the popular Joni Mitchell tribute concerts that allow her to integrate many aspects of her singing career. Since 2011, the “Joni” concerts have been played to many sold out rooms in the Mid-Atlantic. A related album is in the works for 2015, with pianist Alan Blackman as chief arranger.

”Ms. Marianne Matheny-Katz riveted my attention from her first line reading. Like many memorable jazz singers, her voice has the flexibility of a beautiful horn. Think Billie Holiday and Bessie Smith and at moments like a slightly higher pitched Sarah Vaughn.”

“Marianne Matheny-Katz’s new CD, Somewhere in Paradise, comes as close to being perfect as any I have heard!” — John Tegler, review for Baltimore Jazz Alliance newsletter 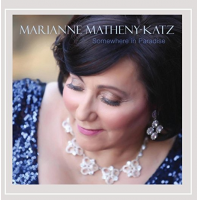 All About Jazz musician pages are maintained by musicians, publicists and trusted members like you. Interested? Tell us why you would like to improve the Marianne Matheny-Katz musician page.