Marie-Véronique (MV) Bourque is a Saskatchewan artist who is not scared from stepping outside the normal path. Her French interpretation of jazz standards and original songs paired with a natural ability to adapt and perform in different genres makes her brand unique and coveted. To her credit, Marie-Véronique was a 2020 highlight artist at both the BOW 2020 and the Contact Ouest. She is the recipient of grants from the Canada Council for the Arts (Quarter Tones Flute Ensemble), the Saskatchewan Arts Board, SOCAN, and the Conseil Culturel Fransaskois.

Marie-Véronique just finished the recording of two new jazz albums, to be released in 2021. The first one with Chapman Stick player Brian Baggett, the second one with a variety of players, including Jack Semple of Saskatchewan and Clement Robichaud of Quebec.

In 2019, Marie-Véronique was invited to Oxford, UK to record Will Cox’s rock album “A Darkling Shore” (released in 2020), along with some incredibly accomplished artists including Orlando Harrison (Alabama 3) and Lina Horner, among many others. The invitation came following Marie-Véronique’s participation in Pro7ect, a songwriters and producers retreat, held in Brighton, UK.

In 2019, Marie-Véronique was a featured artist during the Winnipeg International Jazz Festival with singer Suzanne Kennelly. She has toured in Switzerland, France and Quebec.

In 2018, Marie-Véronique released her first jazz album ‘Une Porte S’ouvre’ dedicated to French Jazz. With this album, Marie-Véronique was nominated in the Avant-Garde Experimental Artist of the Year Category at the 2018 Saskatchewan Music Awards. The album was voted #5 in the 2018 Best Saskatchewan Album of the Year list. ‘Une Porte S'ouvre’ landed twice on the National Jazz Charts on !Earshot. The song ‘Excusez-moi’, composed by Marie-Véronique and Michelle Grégoire and featured on the album, won a semi-finalist award at the Canadian Songwriting Competition and at the Unsigned Only International Music Competition.

In 2016, Marie-Véronique performed world music on Bev Zizzy’s album ‘Standing on a Platform of Kindness’ (song: What about the Children).

MV was a member of the Royal Canadian Mounted Police for more than 25 years after winning an audition to join the RCMP band in 1992. After their disbanding in 1993, Marie-Véronique decided to follow her musical career while carrying the duties of a full-time police officer.

Born and raised in Québec, she studied classical music at the Conservatoire de musique de Québec where she was awarded First Prizes in flute and chamber music. She made her first encounter with jazz in 2012 and trained in this genre by attending the Ali Ryerson Jazz Flûte Seminar in California, USA (2018-2019), the Ambrose University Jazz Camp, AB (2017), the Dordogne International Jazz Summer School, FR (2016) and the Carleton University Jazz Camp (2015). Show less

“ MV is a highly accomplished musician. Her musical prowess covers a myriad of skills and she is an asset to any production, composition or collaborative project.” Lisa Fitzgibbon, Music Producer, Pro7ect Creative Director

Facebook Comments on Marie-Véronique Bourque's recording of her own version of the Moe Koffman's Swingin Shepherd Blues: Fabulous!” “Great!” “ Bravo!!! Wow!!” “Love it!!” “Uplifting. U made my night. Thanks.” “Moe would be so proud of you!” “Absolutely sole music love it” “ Very very well done! 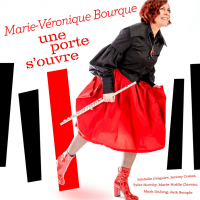 All About Jazz musician pages are maintained by musicians, publicists and trusted members like you. Interested? Tell us why you would like to improve the MarieVeronique Bourque musician page.