Real Street, the effervescent debut album by Mark Sholtez, introduces a vibrant new talent to the musical landscape. The album's 11 original numbers and a remarkable cover of U2’s infamous “All I Want Is You” demonstrates effortless charisma and confident expertise, establishing the young Australian singer/songwriter as both a masterful tunesmith and a magnetic performer who can sell a song with the poise and confidence of a veteran.

The Brisbane native's original compositions draw upon such time-tested styles as swing and lounge, but his playful songwriting and charismatic vocals maintain an unmistakably contemporary sensibility. His distinctive blend of youthful energy, urbane lyrical savvy and a contagious melodic sensibility elevates an impressive assortment of material that ranges from the tongue-in-cheek humor of “Love Me for the Cool” and “Complicated Woman,” to the breezy lilt of “One More Kiss” and “Melita”, to the heartfelt romanticism of “If You Were A Song” and “Dream About You.”

“It was really amazing to be in the studio with guys who played on some of my all time favorite records,” Sholtez observes. “As a songwriter, it's an incredible feeling to finally hear your songs the way you've always heard them in your head.”

Although Real Street is his first album, Mark Sholtez is already well on his way to becoming a musical presence in Australia. He has built a busy and versatile career as a live act. He estimates that he's played about 1000 gigs over the past five years; as well as performing all over Australia, his musical travels have taken him as far as Japan and Indonesia. Most recently Mark performed with Madeleine Peyroux and Diana Krall. “Opening for Diana Krall on her recent Australian tour was such a great opportunity for me. As an unknown artist, and my first time out performing songs from this record I don’t think I could have asked for a better introduction. I literally went from recording my album in New York, to straight out on the road playing venues like the Sydney Opera House…I have always been a fan, but getting to tour with an artist like Diana was really special.”

Mark Sholtez has been playing and writing since childhood. After performing in various Top 40 cover bands as a teenager, he began focusing on his own material. “I've always been fascinated with songwriting,” he recalls. “From the first day I started playing piano, I was trying to write songs, trying to make up melodies to go with the chords I was learning. I didn't start singing until much later though. That was something that I really just fell into. Not long into my twenties I found myself in a band where no one else could convincingly hold a tune. You don’t get gigs if you don’t have a singer, so it was up to me. It wasn’t until other people started to think of me as a singer that I started to get serious about it.”

In the years since, Sholtez has developed an impressive reputation as an exciting and versatile live act, earning a living playing vintage pop standards in Brisbane's bars and lounges while writing and demoing his own tunes in his offstage hours. In addition to providing a steady income that's allowed him to continue to develop his own material, his extensive live work has allowed Sholtez to hone his performing skills.

“I've done everything from singing standards and playing solo piano in hotel lobby bars, to playing weddings and functions, to leading full bands playing four hours of disco, 6 nights a week. The gigs have been a way of making it possible for to me to spend my days in my home studio writing and recording, and working on getting myself to the point where I could become a serious recording artist.”

Sholtez's travels have also included a six-month sojourn to Nashville, where he collaborated with local songwriters and learned some useful lessons about his vocation. “That was kind of an eye-opening experience,” he recalls. “I've always been disciplined and serious about wanting to write great songs, but being in Nashville taught me that songwriting is a real job. You don't sit around waiting for inspiration to strike; you get up every day and you hone your ideas, hone your craft and work at it.”

The seasoned young veteran received his current recording deal with impressive swiftness, after a set of his demos reached the ears of LiPuma. “It all happened so quickly that I didn't have time to catch my breath,” says Sholtez. “I'd made these demos with the idea of making an independent record, and my publisher sent them out to some people. Within two or three weeks, I was in New York meeting with Tommy LiPuma. And a month later, we were recording the album.”

Making Real Street, at New York's Avatar studios, was a dream come true for the first ever Australian artist to be signed to the Verve label. “It was a bit strange.” Scholtez notes, “to come from an environment where you're engineering and mixing your own recordings and working with limited resources trying to do everything yourself, and then all of a sudden you've got access to everything you need and you're working with the best people and all you've got to do is focus on your own performance.”

“There was never any talk of changing the music to make it more commercial or to make it appeal to any particular audience,” he adds. “It was, 'Let's just capture these songs as best as we can.' As a new artist, you expect to have to make compromises, but those issues never came up. It's really inspiring to have someone like Tommy LiPuma say, 'Just go in there and do what you do.'”

With the fulfilling experience of making Real Street under his belt, Sholtez is preparing to take his dynamic song-craft and charismatic performing style to audiences around the globe.

“It's very hard to set goals at the moment. Everything is coming at me so fast.” he comments. “All of my goals up to this point have been focused on getting to where I am now. I got to sign to the label I wanted to sign to, I got to work with my favorite producer and I got to play with some of my favorite musicians. How can you ask for more? So for now, my main goal is to find an audience so I can just keep doing that.” Show less 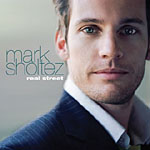 All About Jazz musician pages are maintained by musicians, publicists and trusted members like you. Interested? Tell us why you would like to improve the Mark Sholtez musician page.