Martin was born 11 February 1944, in Northampton, England, and started to play the drums when he was six years old. He played his first professional engagement at thirteen. Studying with the late George Fierstone gave Martin a solid musical and technical background that has proved to be invaluable over the years, which he still strives to improve upon.

He is recognized as a dedicated, travelled, experienced and respected musician, having played with, been requested by, and constantly in demand to play with many of the world's great musicians. Martin has a wealth of experience, natural ability, a fine technique and the skill to adapt and fit into many different kinds of playing situations. He has been playing for over 50 years, won many awards, and has entries in various books and encyclopaedias all over the world. Martin's track record is one to be proud of, and says more about his career than he could ever say himself.

His current projects include “The New Couriers”, paying tribute to the music of Michael Brecker, Tubby Hayes, Ronnie Scott, Victor Feldman, Jimmy Deuchar, and Clark Terry, as well as continuing to work in various other groups, here and abroad. Also working on a device to transport drums up and down stairs!

From 1974 until 2004, Martin toured and recorded in Canada, the USA, South America, Japan, Australia, Europe, and all over the world, with the legendary piano genius, Oscar Peterson, sharing the stage at various times with Joe Pass, Niels Pedersen, Ray Brown, Ulf Wakenius, Herb Ellis, Clark Terry, Ella Fitzgerald, and many legends of the jazz world.

Martin Drew and Chris Dagley died this week in London 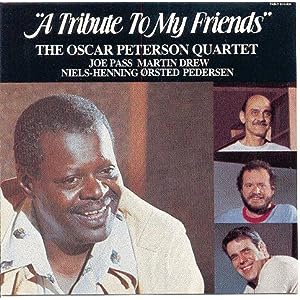 All About Jazz musician pages are maintained by musicians, publicists and trusted members like you. Interested? Tell us why you would like to improve the Martin Drew musician page.