Marty Morell (drums, percussion, vibes, piano, producer) was a member of the Bill Evans Trio for seven years. A highly inventive player, capable of both great subtlety and fiery dynamics.

Morell attended the Manhattan School of Music and studied mallets with Morris Goldberg, and tympani with Saul Goodman at the Julliard School of Music. Prior to joining Bill Evans, Morell worked and/or recorded with the Al Cohn-Zoot Sims Quintet, Henry “Red” Allen , Gary McFarland, Steve Kuhn and Gabor Szabo.

He recorded prolifically and toured the world with pianist Bill Evans and bassist Eddie Gomez from late 1968 through 1974. After leaving the trio, Marty settled in Toronto, Canada where he became a highly sought after studio drummer and percussionist. He fronted his own bands as a drummer and also worked as a vibist and pianist with his Latin band.

Morell has played on numerous jingles, films, and has worked and recorded with many jazz artists such as Don Sebesky, Stan Getz, Kenny Wheeler, Claus Ogerman, Rob McConnell & the Boss Brass, Gabor Szabo, and many others (see discography) He did many drum clinics and percussion seminars across Canada and was the head of the Percussion Department at Mohawk College in Hamilton, Ontario for two semesters, from 1986 -1987)

Considered a highly versatile musician, Morell also performed with the Toronto Symphony, Canadian Opera Company, the Hamilton Philharmonic and the Royal Winnipeg Ballet and from 1989-97 he was the percussionist with the “Phantom of the Opera” orchestra in Toronto.

In 1998 he moved back to his hometown, NYC, to play the Tony award -winning musical “Ragtime”. After a two-year run on Broadway, he toured nationally with the show. Following that, he did the revival of “Kiss Me Kate” (Tony award for Best Musical revival 2001) and “Suessical: the Musical” starring Cathy Rigby. Marty Morell currently resides in Florida and is very active in the jazz community. Show less

The other side of Marty Morell 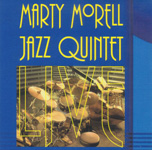 All About Jazz musician pages are maintained by musicians, publicists and trusted members like you. Interested? Tell us why you would like to improve the Marty Morell musician page.