Brad and Elliot Mason hail from Norwich, England, a quiet city 100 miles north of London. Their father, Barry Mason, a trumpet/trombone player and teacher, and their mother, Christine Vance, a jazz vocalist, introduced the young brothers early on to such greats as Dizzy Gillespie, Frank Rosolino, Duke Ellington, Miles Davis and John Coltrane. While only in their teens, Brad and Elliot became highly skilled in jazz improvisation and they were soon renowned for their maturity and musicality. Alone, each musician is outstanding, but together, the brothers' almost psychic connection creates improvisational magic. Today, based in New York, they are taking their unique contemporary sound beyond the boundaries of improvisation and composition to heights both dramatic and inspirational.

Brad Mason (trumpet) was born in England. When only 5 years old, he began trumpet lessons with his father, Barry. At 9, he began piano lessons and played both instruments at school and outside recitals. By 14, he was performing three to four times a week in dance halls, theaters, clubs, and pubs. Though his repertoire included a variety of musical styles, the young musician was drawn early to jazz and improvisation. At age 17, Brad won the national Daily Telegraph Young Jazz Soloist Award and was a featured performer at John Dankworth’s Wavendon Jazz School.
​
Later that year, Brad moved to the United States to study, on a full tuition scholarship, at the Berklee College of Music in Massachusetts where he met and studied with Hal Crook and Phil Wilson, among others. He won his second Daily Telegraph Young Jazz Soloist Under 25 Award in 1993, the same year his younger brother, Elliot, won the Under 21 category. Brad represented Berklee at performances throughout the United States, and in 1995 he traveled to Israel to perform at Dave Liebman’s annual I.A.S.J. conference. He received the Clark Terry Award in recognition of outstanding performance abilities from Berklee College of Music in both 1994 and 1995. It was during these years at Berklee that Brad developed his interest in the electronic valve instrument (EVI) and he soon integrated it into his performances. After graduating from Berklee, Brad moved to New York City where he quickly became in demand as a trumpet and EVI player.
​
Mason performed at the 31st American Music Awards as a member of the band, Bombsquad, the recipients of the American Music Award for Best Unsigned Band of 2003. In January 2007, Mason joined the John Mayer Band for a 2 1/2 year stint of recording and touring world wide. Soon after this in 2011 Brad became a faculty member at NorthWestern University in Chicago as their Jazz Trumpet Professor.

Elliot Mason (Trombone), born in England on January 13, 1977, began trumpet lessons with his father at age four and at age seven, took up the piano. However, struck with an overwhelming curiosity in his father's trombone, young Mason soon switched his focus from the trumpet.

As an eleven-year-old, Mason was already performing as a trombonist in dance halls, theaters, clubs, and pubs, covering all styles of music but concentrating primarily on jazz and improvisation. In 1992, at fifteen, he won the national Daily Telegraph Young Jazz Soloist (under 25) Award and was featured at John Dankworth's Wavendon Jazz School. Entering alternate age categories the next year, Elliot and his brother Brad, as the Mason Brothers, won the national competition a second time and by age sixteen, Mason left England to join his brother at the Berklee College of Music in Massachusetts on a full tuition scholarship where he met and studied with Hal Crook and Phil Wilson, among others.

In 1994, Mason won the prestigious Frank Rosolino Award for outstanding trombone performance abilities, and was invited to perform at the International Trombone Workshop. At eighteen, he won the ITW 's Under 29 Jazz Trombone competition, as well as the Slide Hampton Award in recognition of outstanding performance abilities from Berklee. After graduating from Berklee in 1996, Mason moved to New York City, where he distinguished himself as a respected and highly in demand trombone and bass trumpet player.

In 2007, Elliot Mason was invited to become a member of the Jazz at Lincoln Center Orchestra directed by Wynton Marsalis. While a performer with JLCO, Mason continues to co-lead the Mason Brothers Band with his brother, Brad.

I was captivated by their first CD Two Sides One Story and this record, let’s say, just takes it from where they left off and while maintaining that tradition, shows them both blossoming and breaking new ground and new perspectives. -RANDY BRECKER 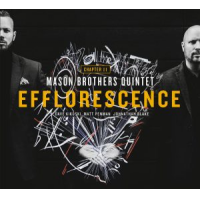 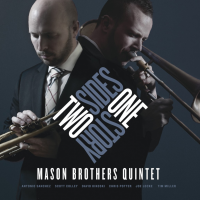 All About Jazz musician pages are maintained by musicians, publicists and trusted members like you. Interested? Tell us why you would like to improve the Mason Brothers Quintet musician page.