Matīss Čudars, born on 1991, is a Latvian jazz guitar player and composer. He's been acknowledged as one of the most pronominal up-raising young music talents from the Baltic States. His unique, highly personal sound, together with the artistically integral, energetically saturated and yet lyrical compositions gives an esthetic enjoyment to a music knower, as well as to a regular listener. The music he plays encompasses a variety of different music genres - strong investment in the jazz improvisation, folk music integrity, the indie rock energy, and classical music harmony. Musicians characterize his music as emotionally touching, interactive, melodical contemporary jazz.

Throughout his youth, Matīss had been busy studying and playing in various orchestras as a trombone and marimba/percussion player, as well as playing the guitar in several rock bands in Latvia. His striving for melodic, rhythmic and harmonic innovations made him interested in jazz harmony and improvisation. At the age of 18 he moved to The Netherlands to study at the prestigious Amsterdam Conservatory with Jesse Van Ruler and Maarten van der Grinten. Since then Matīss has been performing throughout Europe with some of the finest musicians of the scene.

Over the past years Matīss has received various awards. On 2010 Matīss Čudars Trio won the 1st prize at the dutch young talent competition “Prinses Christina Jazz Concours” which gave him the opportunity to study with Brad Mehldau and attend the prestigious Banff Centre Workshop in Jazz in Canada, where he studied with Dave Douglas, Clarence Penn, Donny McCaslin, Matt Brewer a.o. On 2012, with his project “North By Northeast”, Matīss won the 1st prize at the Keep An Eye international Jazz award that incorporated bands from New York, Philadelphia, Boston and Amsterdam.

On March 2012 Matīss went to studio “Fattoria Musica” in Germany to record his debut album “Melancholia” with his quartet. The CD came out on 25th of September, 2012, and is available for sale.

Currently Matīss is doing his bachelors in Amsterdam Conservatory and working with some of the finest musicians of the dutch jazz scene. 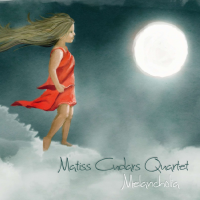 All About Jazz musician pages are maintained by musicians, publicists and trusted members like you. Interested? Tell us why you would like to improve the Matiss Cudars musician page.