Mattan Klein was born and raised in Jerusalem He had studied at the Rubin Academy in Jerusalem, and had graduated with honors from the Berklee College of Music in Boston Mattan is winner of the 1st prize in the 2018 international ‘7 Virtual Jazz Club Web Community Award’! His original compositions have also earned him awards such as the John Lennon songwriting contest, and the USA Songwriting competition.

He had received scholarships from the AICF, The municipality of Jerusalem and the Israeli Ministry of Culture. He is also the Recipient of the ACUM Scholarships for emerging artists (Israeli Agency for Composers and Musicians).

Mattan had performed on stages such as Carnegie Hall in New York, the Kennedy Center in Washington, NJPAC, and more. He was recorded for SONY on the Artist Integrated sampling projects titled Sony Native instruments. He is also a recording artist for the Orange Tree Sampling Corporation.

He performs regularly with Israeli Songwriting heroes such as Miki Gavrielov, Alon Olearchik, Shlomo Gronich and more ... Mattan had played at the Tel Aviv Jazz Festival multiple times, and at the Israel Festival in Jerusalem, collaborating with international virtuosos such as Nicola Stilo and Rodrigo Ursaia.

In 2016 he was a featured soloist with the United Kingdom Jazz Flute Big Band, his music and arrangements were performed at the London Jazz Festival 2016. His critically acclaimed 2016 album release ‘Sound Tracks’ was endorsed and distributed by Helicon Records, and so will his soon-to-be released 2019 album, titled ’Wag the Mammoth in the China Store ‘.

He is a gifted ensemble instructor and an original arranger, teaching and giving clinics and workshops across Israel, including the prestigious Thelma Yellin High School for Performing Arts. He is the music director and producer at the Hof Hasharon Regional Council. 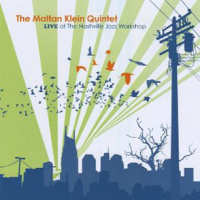 Live at the Nashville...

All About Jazz musician pages are maintained by musicians, publicists and trusted members like you. Interested? Tell us why you would like to improve the Mattan Klein musician page.