Born in 2001 in Hackensack, NJ, Matthew Whitaker grew up surrounded by music. His love for playing music first began at the young age of 3, after his grandfather gave him a small Yamaha keyboard. At 9, Matthew began teaching himself how to play the Hammond B3 organ. Four years later, he became the youngest artist to be endorsed by Hammond—in its 80+ year history. He was also named a Yamaha Artist at 15, becoming the youngest musician to join the stellar group of jazz pianists.

Matthew has had years of music instruction, currently studying classical piano and drums at The Filomen M. D’Agostino Greenberg Music in NYC. It is the only community music school for the blind and visually impaired in the US. He also attended the Manhattan School of Music’s Precollege Jazz Program. He previously studied at The Harlem School of the Arts and was a member of both the Jazz House Big Band and the Organ Messengers at Jazz House Kids in Montclair, NJ.

Matthew has received the “Outstanding Soloist Award” from Jazz at Lincoln Center, the Charles Mingus High School Competition and Festival and the Essentially Ellington High School Jazz Band Competition & Festival. He was also recognized by the Harlem International Film Festival, which named him “Most Remarkable Young Person on Screen.”

In 2010, Matthew was a winning participant in the “Child Stars of Tomorrow” competition, as part of Amateur Night at the Apollo. A year later, at just 10 years old, he was invited to perform at Stevie Wonder’s induction into the Apollo Theater’s Hall of Fame. He returned to the Apollo for FOX TV’s revival of SHOWTIME AT THE APOLLO in 2016, where he won the audience over with his rendition of Stevie Wonder’s classic “I Wish.” Matthew has been on national and international radio and television, which includes the TODAY SHOW documentary series “Boys Changing the World,” HARRY CONNICK JR SHOW and an appearance on the syndicated TV talk show ELLEN!

Under the auspices of the Jazz Foundation of America, Matthew recently released his debut album Outta The Box featuring 10 outstanding tracks introducing listeners to his composing and arranging skills. While his light shines bright on six original compositions.

In 2017, he was named 1 of the 17 people to watch in New Jersey by The Record, one of New Jersey’s largest newspapers and add to Crain's Business New York breakout list of 20 under 20 as a performing artist.

2019, Matthew was a winner of the ASCAP Foundation Herb Alpert Young Jazz Composers Award for his original song “Emotions!”

”Matthew Whitaker is only 18, and he’s also blind, but the musicianship, arrangements, and band leading skills displayed here would be equally impressive were this album made by someone with five times the experience.”  “Now Hear This” - Jeff Tamarkin, JazzTimes Magazine

“With plenty of buzz already behind him, 18-year-old Matthew Whitaker lives up to expectations on Now Hear This...” - Bob Doerschuk, Downbeat Magazine

“The Ronnie Scott's debut of Matthew Whitaker was an absolute beauty.  What a fantastic talent and a great musician he is at such a young age.  The kid turned the place up side down!” Ronnie Scott's Jazz Club - London England

”The two standouts of Saturday's performances were born 66 years apart.  Keyboardist Matthew Whitaker is likely the first bandleader born in the 21st century to play the festival.  Whitaker is only 17 and blind, but his consciousness of the crowd was stronger than the average jazz bandleader

”Matthew Whitaker is only 18, and he’s also blind, but the musicianship, arrangements, and band leading skills displayed here would be equally impressive were this album made by someone with five times the experience.”  “Now Hear This” - Jeff Tamarkin, JazzTimes Magazine

“With plenty of buzz already behind him, 18-year-old Matthew Whitaker lives up to expectations on Now Hear This...” - Bob Doerschuk, Downbeat Magazine

“The Ronnie Scott's debut of Matthew Whitaker was an absolute beauty.  What a fantastic talent and a great musician he is at such a young age.  The kid turned the place up side down!” Ronnie Scott's Jazz Club - London England

”The two standouts of Saturday's performances were born 66 years apart.  Keyboardist Matthew Whitaker is likely the first bandleader born in the 21st century to play the festival.  Whitaker is only 17 and blind, but his consciousness of the crowd was stronger than the average jazz bandleader. ....He sat center stage between two very large pieces of furniture: a Hammond B3 and a grand piano. ....Alternating between the two keyboards, Whitaker summoned the ghosts of Larry Young and Oscar Peterson. ....Whitaker's instrumental trio inspired spontaneous dancing and a standing ovation.  As a student of great piano masters, he has quickly identified the buttons that resonate with a crowd looking for a good time.” Playboy Jazz Festival - Sean L. O'Connell - Los Angeles Times

”This year a highlight was the Matthew Whitaker Trio. Reading Whitaker’s bio during his performance I thought it must be a mistake that he was born in 2001!! But it is true. At home on the grand piano and organ, Whitaker delivered both original compositions as well as his own arrangements of other jazz standards and jazz interpretations of pop tunes. On top of that he is blind....Playing a solo on the organ foot pedals and another playing piano with his right hand and organ with his left hand, he amazed the audience with his talent and versatility.” - Andy McCulloch - Indonesia Expat

“A few months ago, during a WBGO 40th anniversary concert at the Gateway Center, Matthew Whitaker had a large lunchtime crowd practically eating out of his hands. Whitaker is that kind of musician...” “...at 18 he’s already a seasoned pro with a substantial following…”  - WBGO Jazz 88.3 FM

15-year-old Whitaker was heating up The Harlem School of the Arts' benefit concert, at Manhattan’s Highline Ballroom.  He was the opening act, bandleader and musical director....“That boy just threw the holy spirit on that!” - Havelock Nelson - The Huffington Post

“ In another heartfelt moment, McBride teamed his bass with piano, played by 15-year-old Matthew Whitaker of Hackensack, for Oscar Peterson's “Hymn to Freedom.” - NJ.com

“It has been my privilege to present this musical prodigy to the Apollo Theater audiences since he was age 9. As composer, arranger and musician, Matthew Whitaker is beyond his years and focused on sharing his gifts and joy with the world.  Enjoy, with the knowledge that there is more to come.”  - Marion J. Caffey - Producer Amateur Night at the Apollo

“Matthew Whitaker is music.  To see and hear him play is to know that divine talent exists.  Beyond his innate musical abilities is a sheer joy and passion to create music.  You can expect great things on the horizon from this remarkable and lovable young musician.”  Monifa Brown - WBGO Jazz 88.3 FM

Jazz Foundation of America Loft Party  ”The real draw, though, was the music....Despite his young age, Mr. Whitaker was one of the more sought-after guests; older musicians came up to him to praise his performance and to introduce themselves.” - Carson Griffith - The Wall Street Journal

“Young Matthew Whitaker, who played the piano and also happened to be blind, stole the show as he jammed and improvised.  He garnered probably the loudest ovation of the night after he finished his solo, and conductor Steven Reineke, (NY Pops orchestra), was blown away by how good the 11-year-old was.  “I was just told that the young man on the keys is only 11 years old.  Are you kidding me?  That's ridiculous!” - Ross Bernhardt - Writer for Charged.fm on performance with Ozomatli and NY Pops at SummerStage. 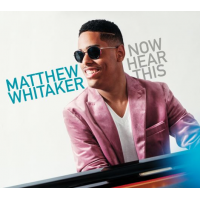 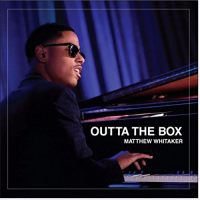 All About Jazz musician pages are maintained by musicians, publicists and trusted members like you. Interested? Tell us why you would like to improve the Matthew Whitaker musician page.