This musician, passionate about art in all its guises, an inspired and generous composer, dedicates much of his time to studying the language and the history of music in general, from classical to rock, to folk and more... These musical styles have always been part of his life and he considers them closely tied to each other. Along with his role as lead musician, he regularly plays with many different musicians, accompanying them at the organ or piano, for both regular and one-off sessions. Together, they play both original repertoires and cover versions, the keywords being “exchange” and “openness”. He is without a shadow of a doubt one of the instrumentalists, composers and leader to keep an eye on in the future...

Matthieu, a pianist, organ player and composer, was born in Grenoble in the French Alps, in the same year as the release of The Wall and Off the Wall, two albums that have left their mark on the history of music. His musical journey started in the Rhone-Alpes region at the beginning of the 21st century, later taking him to Lyon, New York and finally Paris, where he currently resides.

He set up his first quartet with his older brother Guillaume, saxophonist, inspired by hard-bop and the Blue Note Records of the 60s, and quickly started playing with some of the best musicians of the region. At the same time, he studied for three years at the Chambéry conservatory, and graduated from there in 2001.

He moved to Lyon in 2000 and created the group Talkin'About recording two albums with them: Reg (2001) and Connections (2005). To compensate for the frequent absence of bass players during rehearsals, it was also during this period that he started playing an instrument that he has carried on playing ever since: the Hammond organ.

Winner of the Lavoisier scholarship in 2002, he went to New York to study for a year at the prestigious New School University. The year spent in total immersion in the cradle of jazz was an important step in his musical education, and gave him the chance to work with a large number of renowned musicians and teachers. It most importantly gave him the opportunity to spend many a night discovering the incredible, bubbling music scene, attending concerts and participating in numerous jam sessions.

Since 2006, while dedicating more and more of his time to composing, he launched two new projects with himself as the lead musician, one at the piano and the other at the organ, surrounding himself with inspiring musicians: Piano trio (compositions and new takes on classic standards) and Organ Quartet (original compositions).

This work led to the recording of his first record as lead musician with his group Matthieu Marthouret Organ Quartet: the album Playground came out in October 2009 on label MuSt ReCorD . Spurred on by excellent reviews, both from critics and the public, he continued to play and write regularly for this group. He recorded a second album, Upbeats, scheduled for release in March 2012 on the label Double Moon Records. Show less

ABOUT THE ALBUM Smalls Streams...Big Rivers (Double Moon Records, 2012)
”Very cool session from the Bounce Trio (...) Their 2014 self-titled release Bounce Trio has got plenty of the classic warmth & groove of late-sixties organ-led hard bop and soul jazz recordings (...) Remarkably, though, despite the swings back and forth between an old-school and new- school sound, the album keeps a strong sense of cohesion. (...) that this is fun music that’s very easy to dive into. “ BIRD IS THE WORM

« The pairing of tenor sax and keyboards gives the music a warmth: Marthouret favors a rich, rounded, tone and Thys' tenor sound has just enough of an edge to ensure that the pair complement each other

ABOUT THE ALBUM Smalls Streams...Big Rivers (Double Moon Records, 2012)
”Very cool session from the Bounce Trio (...) Their 2014 self-titled release Bounce Trio has got plenty of the classic warmth & groove of late-sixties organ-led hard bop and soul jazz recordings (...) Remarkably, though, despite the swings back and forth between an old-school and new- school sound, the album keeps a strong sense of cohesion. (...) that this is fun music that’s very easy to dive into. “ BIRD IS THE WORM

« The pairing of tenor sax and keyboards gives the music a warmth: Marthouret favors a rich, rounded, tone and Thys' tenor sound has just enough of an edge to ensure that the pair complement each other. Gautier Garrigue's drumming is consistently excellent. His playing is full of energy and imagination. » ALL ABOUT JAZZ
« A classic organ trio capable of laying down a groove without being stuck in a rut. (...). It's funky, it's danceable and it's very listenable. » BE BOP SPOKEN HERE


ABOUT THE ALBUM Upbeats (Double Moon Records, 2012)
«A very fun recording, featuring a quartet of organ, guitar, drums, and bass. Plenty of groove, some swing, a ballad or two, and some straight-ahead tunes that veer off into exhilarating directions. An album easy to bounce along to. The vocal harmonization on “Kairos” is just thrilling. This album is a very neat surprise. Find of the Week» 17DOTS.COM/ EMUSIC

ABOUT THE ALBUM Playground (Must Record, 2009)
« Music is without a doubt, fluid. There is fluidity in this recording. It is a quintessential quality, structuring the phrasing and organizing the relationships amongst musicians. There are also colors and original tones, giving it an identity, making this music unique. Matthieu Marthouret's great talent also plays a large part, melodiously experimenting with great elegance. He certainly is gifted. I wish Matthieu a long and prosperous musical career! »

« This jazz is played with great harmony by musicians from a generation that listened to Pink Floyd and Michael Jackson before listening to Jimmy Smith, Larry Young, Dr. Lonnie Smith and Larry Goldings only to mention organists . Pleasantly convincing! » (Culture Jazz)

« The fluidity of the quartet’s music cannot be rivalled. The pieces follow one another like a priceless string of pearls. » (Paris on the move)

« He is sitting at his Hammond B3 organ, leading the way. And for a little over fifty-seven minutes, musical magic takes over. (Paris on the move)

« Marthouret tames groove and soul, or rather, befriends them, so that they do not need to scream or cry to exist. » (Les dernières nouvelles du jazz)

« Sam Barsh, Matthew Marthouret, Jared Gold and Gary Versace are four organists who each in his own way, confirms the influence of Larry Young. Marthouret tackles the instrument in a quiet way and reveals the warmth of its tone, with a repertoire of his own. His pieces emphasize different levels of melody, with clever arrangments » (Jazz Magazine-Jazzman)

« The spirit of dance can be felt throughout this album. It is not so frequent in jazz. Let’s not spoil the fun. Let’s come and play on Matthew Marthouret Organ Quartet’s « Playground » ». (Le jarsjasejazz) 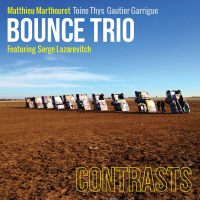 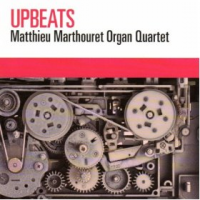 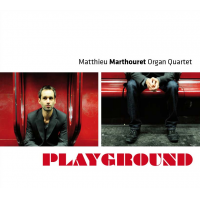 From: Contrasts
By Matthieu Marthouret

From: Bounce Trio
By Matthieu Marthouret

All About Jazz musician pages are maintained by musicians, publicists and trusted members like you. Interested? Tell us why you would like to improve the Matthieu Marthouret musician page.