Matt Mayhall is a percussionist, composer, session musician and educator.

On his newest album Fanatics (self-released), he leads a trio with Jeff Parker on guitar and Chris Speed on tenor saxophone and clarinet. Stereogum hailed it as one of the best jazz releases of February 2020, calling it “a trio date on which the tunes are simple platforms for extended, bluesy soloing… in a way that recalls Ornette Coleman’s harmolodic theories, while still managing to stay rooted to the ground.” The album was produced, engineered and mixed by Mayhall’s frequent collaborator and GRAMMY-winning producer Paul Bryan.

Mayhall’s debut album Tropes (Skirl Records, 2016), also a Paul Bryan production, featured Parker, Speed, Jeff Babko on keyboards, and Bryan on electric bass. “The Best New Jazz On Bandcamp: November 2016” said of Tropes, “This album shows just how strong subtlety can resonate, and of how nuance can be the driving force of creative vision.”

Tropes also caught the attention of Modern Drummer magazine, which featured Mayhall in the August 2017 issue. “Like a freak brew of the Chicago post-rockers Tortoise and the famed tribute-album producer Hal Willner, Mayhall’s debut solo release, Tropes, rolls his diverse skills into one untidy, rumbling package.”

Mayhall’s compositions have been recorded on Paul Bryan’s 2020 album Cri$el Gems, as well as Sides Of Jazz by Ron Carter, Airto Moreira, and Peter Erskine (2016), on which Mayhall plays alongside bassist Ron Carter.

Mayhall’s professional duties have also taken him well outside the jazz world, touring with The Both (a power-pop trio with Aimee Mann and Ted Leo), with Aimee Mann in support of her GRAMMY-winning album Mental Illness, and with folk singer Dar Williams. He starred alongside Fred Armisen and Bill Hader in the IFC series Documentary Now! as a member of the Blue Jean Committee. He has appeared on The Tonight Show with Jimmy Fallon, CONAN, and Late Night with Seth Meyers. He also spent several years in Josh Haden’s alt-country/slow-core band Spain. He appears alongside the Haden Triplets on Spain’s The Morning Becomes Eclectic Session, as well as alongside Petra Haden and Charlie Haden - in his last recording session before his passing in 2014 - on Sargent Place.

He is endorsed by Gretsch Drums, Sabian Cymbals, and Innovative Percussion Sticks and Mallets.

Matt is married to singer-songwriter Kelly Jones. They have a daughter, Cassidy. Show less 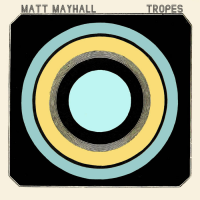 All About Jazz musician pages are maintained by musicians, publicists and trusted members like you. Interested? Tell us why you would like to improve the Matt Mayhall musician page.