Refined, soulful, captivating…..these are just some of the words fans use to describe the inspired contemporary jazz of The Maurizio Grondona Group. Making their debut on the Italian scene in 1987 with ‘On My Road’, the group is led by singer, guitarist and composer Maurizio Grondona, a native of Bari (southern Italy on the Adriatic coast).

No stranger to performance and with eight releases to their credit, The Maurizio Grondona Group has been featured at numerous well-regarded jazz festivals and showcases including Milan SIM, Jazz For Amnesty International, Vieste Festival Golden Lion in Venice and was recently highlighted in Los Angeles at Thursday Night Vibe (past performers include Al Jarreau, Marcus Miller, Paul Jackson, Jr., etc.). In addition, the group has appeared at the prestigious Los Angeles Indie-Music / Film International Summit (LA-IMIS).

It has been two years since the release of ‘The Night Vibe’,and things are really moving forward by their tour In Los Angeles, as well as a great response in the U.S.A. to the single, ‘Yearning For Your Love,’ first with Smoothjazz.com and the song entering the Top 50 chart; also, WJAB 90.9 FM radio in Huntsville,Alabama Under the direction of Mrs.Elizabeth Sloan-Ragland, and Jackie Anderson’s great passion for the music. I am happy to say that the band enters the recording studio in August (2015) to start on album #12. “All in Me”. The tracks are marked by a more urban jazz inspiration – songs that I wrote, and some from a previous album, arranged with a new taste of the band Southern Italy. Show less 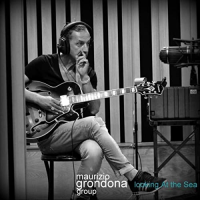 Looking at the Sea

All About Jazz musician pages are maintained by musicians, publicists and trusted members like you. Interested? Tell us why you would like to improve the Maurizio Grondona musician page.