Mavis Rivers has been described by many of her peers as one of the world’s great female jazz singers, and she attracted an international following among jazz purists. Frank Sinatra is said to have described her as the ‘purest voice’ in jazz, comparing her to Ella Fitzgerald. Her New Zealand recordings are little known to the outside world, but they form an important part of the history of recorded music in this country. Although she spent much of her life in the United States, Rivers holds a special place in the hearts of many New Zealanders, who warmly remember her as this country’s finest jazz singer.

Mavis Chloe Rivers was born in Apia, Western Samoa, on 19 May 1929. One of 13 musically gifted children; she performed in a series of family musical evenings that soon made their home an entertainment centre. Some of these were broadcast on Western Samoa’s first (short-wave) radio station. As the Second World War started in the Pacific, the family moved to Pago Pago, in American Samoa. She sang at the army bases backed by her father’s band, a special switchboard telephone hook-up enabled soldiers and marines to listen in from further afield.

The Rivers family’s next move, in 1947, was to Auckland, where she successfully auditioned for nightclub work. In 1948 she branched out into radio work on stations and she soon became one of the most popular female singers in New Zealand and in 1949 made her first 78 rpm record with the newly formed TANZA label. Mavis went on to record over 40 songs with TANZA, as a soloist, in duets, and as a guest singer with many popular bands of the era. She later recorded on the Zodiac label, another pioneer of the New Zealand music industry. Although she initially recorded mostly Polynesian-style music, she quickly showed her versatility by doing jazz numbers with astonishing skill.

In 1953�”54 Rivers spent a year in the United States, studying on a scholarship at Brigham Young University in Provo, Utah. She sang in a variety show in Salt Lake City until her student visa expired, and then returned to American Samoa for six months, working as a disc jockey at its radio station. She went back to the US in January 1955 and settled in Los Angeles. Jobs were scarce at first, and for a few months she returned to secretarial work, before securing a guest spot with a Hawaiian quartet in local clubs. The group included a Filipino singer and bass player, Glicerio Reyes Catingub (known as David), whom Mavis married in Los Angeles on 4 October 1955.

She retired briefly from singing the following year when the first of her two sons was born. She then resumed her career and steadily gained a following, not only in Los Angeles but also in the new entertainment capital, Las Vegas.

In 1958 Rivers signed a major recording contract with Capitol Records, where she worked with Hollywood arranger Nelson Riddle on three albums, including “Take a Number” (1959). Frank Sinatra caught her act and immediately signed her to his newly formed Reprise label. There she worked with Marty Paich, arranger for Ella Fitzgerald, Mel Tormé and others. She went on to record numerous albums with major and minor labels in the US, and appeared on ‘The Steve Allen Show’ and other television programs.

Rivers returned to New Zealand regularly: in 1963�”64 she visited her family in Auckland, and performed on radio and television; in 1977 she starred at an Auckland jazz festival; and in 1981 she returned with her son, musician-arranger Matt Catingub, to appear in a royal variety show for Queen Elizabeth II.

Two years later Mavis and Matt were back at the Auckland Town Hall, where she was clearly moved by the reception she received. In 1990 she sang at the New Zealand International Festival of the Arts in Wellington and at a jazz and blues festival in Auckland. Rivers continued performing until her death, which occurred after a show in Los Angeles on 29 May 1992. 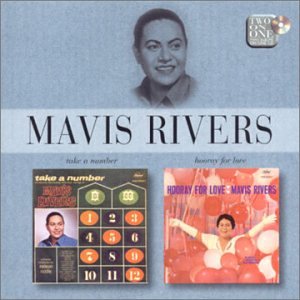 All About Jazz musician pages are maintained by musicians, publicists and trusted members like you. Interested? Tell us why you would like to improve the Mavis Rivers musician page.